Reanimatrix by Pete Rawlik
Published by Night Shade Books on October 18th 2016
Genres: Horror
Pages: 364
Format: ARC
Source: Publisher
Thanks to Night Shade Books for providing me with a copy of this book in exchange for my honest review. This does not affect my opinion of the book or the content of my review.

Make no mistake, Lovecraft-inspired stories are a real hot thing right now and I am gobbling it all up. This year the types of Lovecraftian fiction I’ve already read have ranged from bloody gorefests to dark comedies, and there just seems to be a style for every persuasion. And if your tastes happen to run in the direction of weird fiction and pulp noir, then Reanimatrix is sure to make you very, very happy.

Unfolding through a series of diary entries and letters, this story follows the strange lives of two main characters, Robert Peaslee and Megan Halsey. It is the 1920s, and Robert was an officer in the Great War returning to his home town of Arkham to work on the police force, handling the sensitive cases that the other cops don’t want to touch. One fateful day he meets Megan, a young heiress with a troubled past, and immediately feels drawn to her. Years later, however, Robert is called to work a crime scene by the docks where a body of a woman has been discovered, and he is shocked and heartbroken to later learn that it is none other than Megan Halsey.

Before the investigation can move forward though, her body goes missing. Robert soon becomes consumed with the case of what happened to Megan, especially once he suspects that she might not really be dead. Determined to solve the case, Robert attempts to retrace Megan’s steps, going to places she visited and reading through her diary entries in the hopes of gleaning some clues, but what he finds is way more than he bargained for.

Written in a style reminiscent of the classic hardboiled detective pulp stories, Reanimatrix is a mystery narrative interspersed with tales of the occult and supernatural. This combined with the influence of Lovecraftian themes makes for an entertaining read, though admittedly I felt the pacing stumbled a little due to the book’s unique structure. Divided into multiple parts, the story alternates between Robert and Megan’s perspective and takes a while to get started, and the mystery behind Megan’s “death” does not even come into play until well into the novel. The prose is also very thick, almost like the author is channeling the works of the time, so coupled with the extended introduction I wouldn’t be surprised if some readers might find things rough going at first.

The epistolary format also feels disorganized at times, especially with the random journal entries that feel “inserted” and don’t necessarily have anything to do with the main story. In fact, afterwards I found out that some of them were actually short stories that have appeared in other anthologies. Personally, I had mixed feelings about this. In most cases, these sections added nothing to the overarching plot and I often had to fight the temptation to skim them so that we could get back on track. That said, hardcore Lovecraft fans might appreciate these little detours a lot more than I did, and to be fair, some of the chapters were genuinely interesting, especially when they delved into the gruesome, the macabre, and even the raunchy. This book definitely isn’t for the squeamish, not to mention the handful of over-the-top explicit sex scenes that are sure to raise a few eyebrows.

To be sure though, Reanimatrix is true to the pulp tradition, and as such, there’s a strong element of sensationalism at play here. For me, the pacing was a little inconsistent and the prose a bit hard on the eyes, but I loved the atmosphere and characterization of the two main leads. Robert and Megan’s twisted tale of love and un-death is guaranteed to be unlike anything you’ve ever seen before, and the nod to the scary works and worlds of H.P. Lovecraft is also a clever touch. Pete Rawlik does a fine job subverting the genre while also paying loving homage with this novel of weird science, occult horror, and monstrous trappings, and if that sounds like something you would enjoy, then you’re definitely in for a special treat. 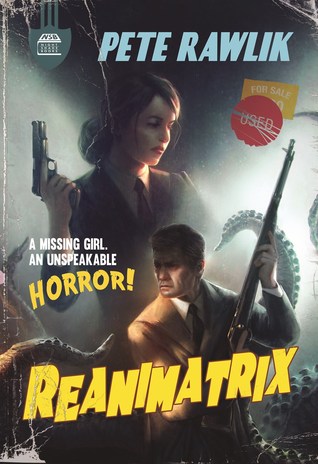