Stay Crazy by Erica L. Satifka
Published by Apex Book Company on August 16 2016
Genres: Fantasy
Pages: 256
Format: eARC
Source: Publisher
Thanks to Apex Book Company for providing me with a copy of this book in exchange for my honest review. This does not affect my opinion of the book or the content of my review.

The striking graphic novel-like cover immediately drew me to this book, but I was also captured by the story of a slightly unlikable girl named Emmeline who is trying to overcome a mental illness and save the world at the same time. Satifka is a new author for me, and I absolutely loved her writing, and the hilarious dialog between the characters had me chuckling out loud. Em is an interesting protagonist in that she didn’t grab my sympathy until about halfway through the story. She doesn’t have much of a filter and is likely to blurt out inappropriate comments just about everywhere, but she has a good heart and is simply trying to stay afloat after her first year at college goes horribly wrong.  Stay Crazy reminded me a little of Grady Hendrix’s Horrorstör, which also involves an evil entity taking over a retail space, so if you enjoyed that book, you will have a blast with this too.

Nineteen-year-old Emmeline has come home to Clear Falls, after an incident at college left her with gaps in her memory and a diagnosis of schizophrenia. Now she’s seeing a therapist and living at home with her mother and sister and trying to figure out what went wrong. Em’s sister Jackie has just found religion and is trying to recruit Em (and Em’s hysterical response to that is “You know we’re Jewish, right?”). And her mom has encouraged her to get a job at the local Savertown USA, where she’s been hired as a stock girl in the frozen food department. Em thinks working at Savertown is the best way to get her life back on track.

That is until one day she hears a voice speaking to her from a box of frozen chicken nuggets. The voice calls itself “Escodex” and he tells Em that an evil entity from another dimension is trying to infiltrate Savertown and ultimately take over the world. Em isn’t sure if she’s actually hearing a voice, or if her mental illness is simply making itself known. But Escodex promises Em that if she helps him stop the entity, he’ll tell her what happened to her father years before, when he walked out one day and never came back.

When employees at Savertown suddenly start dying, Em begins to investigate with the help of a fellow employee named Roger, who can also hear Escodex speak. The entity is about to break through into their world, and it’s up to Em to stop it before things get really crazy.

This book was so funny! I loved the descriptions of Savertown USA (think Walmart or Costco). Just like any workplace, Em has to put up with a whole slew of weird co-workers, including her department manager who is worried about Em’s mental state and a couple of bullies from other departments. Once Em starts seeing manifestations of the entity in some of the less savory employees, things really start to get strange, and when she and Roger come up with a brilliant plan to stop the evil, I stopped worrying about the over-the-top craziness and just enjoyed the ride.

One of the ongoing mysteries of the story involves Em’s father, who left to get cigarettes one day when Em was eight, and never came home. Part of Em’s anxiety involves her worries about whether or not her father loved her, and even though deep down she knows he did, she still wonders if she was the reason he left. And while it’s not a major plot point, it was a welcome side story with big emotional impact. Em’s fondest wish is to find out once and for all what really happened to him, and when Escodex tries to bribe her into helping him, by offering up that answer, Em jumps at the chance, even though she knows that A – Escodex may be lying to her and B – Escodex might not even be real.

Satifka does dialog really well, especially between Em and Jackie. As I mentioned before, one of Em’s charms is her direct way of speaking. She has no qualms about saying exactly what she thinks, and her reactions to Jackie’s sudden born-again Christian leanings were priceless. Getting dialog to sound natural is not easy, but Satifka does it like a pro. I imagine she’d be very good at script writing!

The only plot point that I had problems with was Em’s memory lapse of what happened to her in college. Her memories come back to her in bits and pieces during the story, but the author didn’t fully explain exactly what happened (or it could be I simply didn’t get it). It was a little frustrating because I feel like it was an important part of the book, as it ties in with the way Em is able to fight the entity during the story’s climax. This event also has a lot to do with why Em is in therapy, so I think a clearer explanation would have made my reading experience even better.

But aside from that, Stay Crazy was a blast to read. This is a tale where “crazy” runs amok, not only in the title, but in just about every aspect of the story. If you’ve ever felt just the slightest bit crazy yourself, then this book is for you. 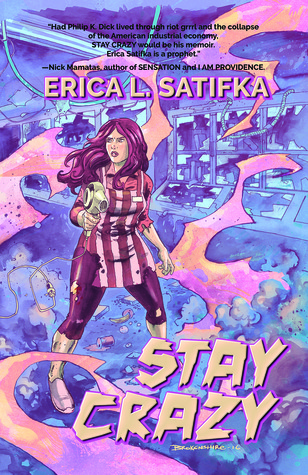