Twilight of the Dragons by Andy Remic
Series: The Blood Dragon Empire #2
Published by Angry Robot on May 3rd 2016
Pages: 336
Our reviews of this author: The Dragon Engine, A Song for No Man's Land
Thanks to Angry Robot for providing me with a copy of this book in exchange for my honest review. This does not affect my opinion of the book or the content of my review.

Part two of the high-octane fantasy series, from the natural successor to David Gemmell. A group of heroes makes dangerous bargains in order to overthrow the dragonlords and their Dragon Engines.

I have to admit, I’m of two minds regarding Twilight of the Dragons. Yes, it’s a fun, foul-mouthed, frantic sequel to both The Dragon Engine and The White Towers, but its narrative quality is all over the place. Much of it reads like a first draft manuscript, awkward and juvenile in places, that somehow sneaked past the editor. Structurally, it feels like it’s one step removed from being polished as well, jumping between storylines, with random flashback chapters interspersed, and some definite pacing issues. It made for a frustrating read, which (unfortunately) took something away from the enjoyment.

Having said all that, this is a bold, brash, bloody story in which Andy Remic returns to the world of grimdark fantasy. One story thread catches up with the survivors of the The Dragon Engine, following their war-weary, emotionally exhausted descent into the bowels of Wyrmblood. These are adventurers who suffered greatly in the last book – beatings, torture, and even rape – and it weighs heavily upon them. As depressing as it made those scenes, I admired Remic for not just shrugging off the pain and going all gung-ho with the heroics.

The other story thread catches up with the survivors of The White Towers, drawn into the story when the escaped dragons of Wyrmblood attack the town, interrupting their own bitter infighting. Not surprisingly, the Iron Wolves have some of the best scenes in the novel, although the constant bickering between Dek and Narnok wears a bit thin. Again, Remic deals with the aftermath of heroic deeds, catching our heroes at their lowest, and allowing them the chance to deal with both past and present. There’s a lot of bad blood and tainted motives here, but Nanok’s suicidal challenges to the dragon are probably the high point of the book.

As for the dragons, they are every bit as fearsome and horrific as you’d expect from Remic. Their attacks upon villages and towns are beautifully choreographed, with equal parts fear and awe on those unlucky enough to be torn apart, chewed in half, roasted alive, or buried beneath rubble. Both angry and clever, they’re not only out for revenge, but enjoy verbally baiting their victims. We don’t see as much of the dwarves this time around, but they are still mean, miserable, and malicious, with Crayline challenging Skalg for the title of most monstrous. As for Skalg, his story arc was interesting, but I didn’t feel the pay off was nearly worthy of his legacy – one place where the story itself faltered for me. Similarly, I thought the Splice were wasted a bit here, especially given the new twist put on them by King Yoon, but it was immensely satisfying to see them take on a dragon.

Despite its flaws, this is still no-holds-barred epic fantasy for a mature audience, with the reappearance of the Iron Wolves definitely kicking it up a notch. There’s very clearly a door left open at the end of Twilight of the Dragons, so here’s hoping there’s one more adventure to come. 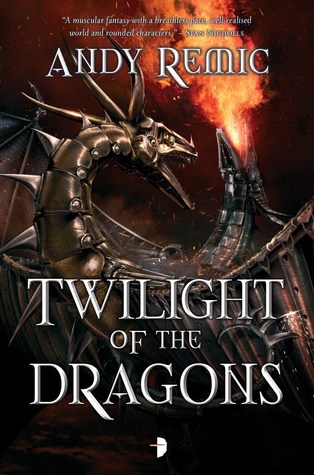