Red Tide by Marc Turner
Series: The Chronicle of the Exile #3
Published by Tor Books on September 20th 2016
Genres: Epic
Pages: 544
Our reviews of this author: Dragon Hunters
Format: eARC, Finished hardcover
Source: Author
Thanks to Tor Books for providing me with a copy of this book in exchange for my honest review. This does not affect my opinion of the book or the content of my review.

The Rubyholt Isles is a shattered nation of pirate-infested islands and treacherous waterways shielding the seaboards of Erin Elal and the Sabian League. The Augerans approach the Warlord of the Isles, seeking passage for their invasion fleet through Rubyholt waters. When an Erin Elalese Guardian assassinates the Augeran commander in the Rubyholt capital, the Augerans raze the city, including its Temple of the White Lady. Avallon Delamar, the Emperor of Erin Elal, requests a meeting with the Storm Lords to discuss an alliance against the Augerans. When the Augerans get word of the gathering, strike, in the hope of eliminating the Erin Elalese and Storm Lord high commands. They have not counted on the Rubyholters, however, who come seeking revenge for the destruction of their capital. But the battle lines for the struggle are not as clearly drawn as it might at first appear.

Taking place almost immediately on the heels of Dragon Hunters, this is a story that reaches back to connect with some of the characters and stories of When the Heavens Fall. It’s the book in the series where everything begins to come together, and where we begin to see hints of the bigger picture into which all the pieces will eventually fit.

My first impression of Red Tide was that it’s a more human tale, less about gods and monsters than first two books, which fits with the conflict at the heart of the story. I went into it being most excited by Romany’s return, but I ended up looking forward to the stories of Amerel Duquy and Galantas Galair the most. For me, they were the heart of the book. As for Karmel and Caval, if you thought they had personal issues between them in the last book, those conflicts really come to a head here, both in terms of faith and family. Initially, I didn’t like them as much here, finding their scenes a bit dry and impersonal, but looking back I can see how that was just me getting caught up in their tensions.

Commander Eremo, leader of the Augeran expeditionary force, really intrigued me. Here is a man who puts an interesting face on ‘the enemy’ for the reader, humanizing them, even as he reveals the depths of Augeran viciousness. As for Hex, he may be the most chilling, most amusing, most consistently entertaining secondary character I’ve come across in quite some time. I just smiled every time he stepped onto the page. His confrontations are incredibly intense, with so much drama and so much danger wrapped up in his dream magic. If I had one character complaint, it’s that we don’t get to see enough of Mazana this time around, but what we do see really makes me want more.

The use of magic here was absolutely stunning, both in terms of dream magic and Will. More importantly, it isn’t just cool, flashy bits to dazzle a reader – it has substance, is integral to the plot, and serves to both support and move the story along. Some of the best magic in the series comes in the ship-to-ship battles with the stone skins, revealing magic to be a legitimate weapon as well as a useful tool. Without giving anything away, the attempt to jump Liar’s passage was fantastic, while the shattering of a simple the waterglobe has spectacular consequences.

Pacing wise, this was a pretty even book. The first chapters are a bit slow, but there are a lot of characters to bring together, and several story lines (both new and existing) to connect. Once the story hits the half-way mark, with an underwater flight through the Dragon Boneyard, it just barrels along, carrying the reader with it. In terms of narrative, it’s a smoother book as well, with cleaner transitions between scenes and points-of-view that just flow better, giving the story a truly seamless feel.

Finally, while readers know that death is rarely what it seems in the genre, and isn’t always as final as it appears, I like that there were consequences to the story. There are stories and character arcs that seem to come to an end in Red Tide, and I’m entirely satisfied with how they were resolved, even if I’m hoping one or two aren’t quite done. For a series that has just gotten stronger and more entertaining with each installment, Turner has set the bar high for a fourth novel . . . and I cannot wait to see what it brings.

Tags: Marc Turner, Red Tide, The Chronicles of the Exile 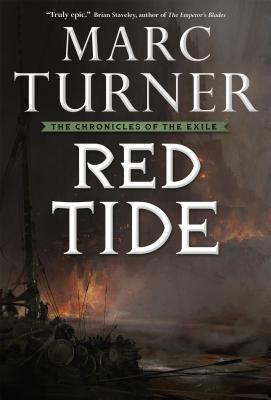