Necessity by Jo Walton
Series: Thessaly #3
Published by Tor Books on July 12th 2016
Pages: 336
Our reviews of this author: The Just City
Thanks to Tor Books for providing me with a copy of this book in exchange for my honest review. This does not affect my opinion of the book or the content of my review.

Necessity is the final book in the Thessaly trilogy by Jo Walton. As the story continues generations from the start of the series, we find the citizens doing very well, integrating themselves into the interstellar world. There are alien residents and traders visiting the planet. The individual cities seem to be thriving, and people are free to move wherever they feel best fits their personal ideology. It is utopia, finally (or at least much closer than they had achieved previously). But there are complications caused by a sudden death and then a nearing spaceship that will be their first interactions with space humans which kick our story for this final chapter in the series.

I have to say, my reading experience with this one was a little different than the first two. Both The Just City and Philosopher Kings seemed to create a more philosophical undertone to them that I just didn’t find in Necessity. The Just City really showed how rigid structure, even when it is with the best intentions, creates a new set of problems. It also explored what constitutes a thinking being, at what point does artificial intelligence become independent and an individual. Philosopher Kings took a strong look at forgiveness versus vengeance, we also got to see Pytheas come to terms a bit more with his mortal life versus being a god with his immortal life.

While Necessity did have some themes to it, I just felt it lacked the gravitas I found in the first two. There was the philosophical question of what the book called necessity, which in essence is avoiding paradox due to time travel. Since the gods don’t experience time in the same way as humans, this is particularly important for them as they hop around in the human timeline, they are bound to make sure certain things happen as to not change. It’s hard to give a good example without giving spoilers. But pretty much, they can be bound to do certain things based on a history that happened in the human timeline that perhaps hasn’t happened yet in their own timeline. And does this mean they are ruled by fate? Is avoiding paradox essentially being bound to a particular fate? There are some interesting questions, but honestly, I just was not as intrigued by it as the themes I found in the first two books.

Perhaps because I could see more real world applications for the first two books, where as until time travel becomes a real thing for humans, this one just felt less applicable. Although, for real world relevance, there are race relations, cultural differences and identities that all come in to play. They have to learn to be open and accepting of beings that are different from themselves, which is an excellent theme, but it wasn’t enough to capture me on the same level as the first two books.

Another thing that surprised me was how the trilogy wrapped up. I have conflicted feeling about it, feeling like it was a good ending, but maybe a bit too good, too tidy (I hate to say too happy, but I suppose maybe that is part of it as well). Honestly, I may look back later and decide I love the ending, it just ended with a different tone than I expected, which is not necessarily a bad thing. Sometimes it is nice for a series to throw a curve ball with the unexpected.

I have enjoyed Crocus as a character, but I was not always a fan of getting his point of view. Some of the chapters from this perspective I found a bit dry. Not all of them, there were some that actually read quite well, but a few just lacked enough personality to make the material feel like a story, it lacked the emotion that I found with the other perspectives.

But, don’t let all of that turn you off. There are some interesting new characters in here, there is an interesting story. I just couldn’t help but feel it did not have the same weight to it as the previous two books, and for that reason, it felt like it was missing something.

If you have read the first two, I do think this is still worth reading. If you haven’t, then don’t let my lower rating of this one deter you. The first one reads incredibly well as a stand alone (I had no idea it was going to be a series). and the second one is also a wonderful read. 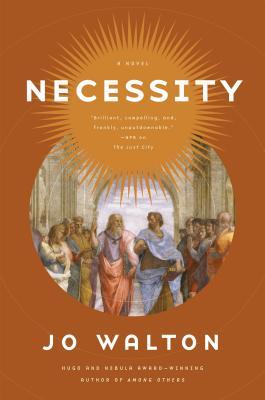