A Promise of Fire by Amanda Bouchet
Series: Kingmaker Chronicles #1
Published by Sourcebooks Casablanca on August 2nd 2016
Genres: Fantasy, Romance
Pages: 448
Format: eARC
Source: Publisher
Thanks to Sourcebooks Casablanca for providing me with a copy of this book in exchange for my honest review. This does not affect my opinion of the book or the content of my review.

Catalia Fisa is a powerful mage and clairvoyant hiding out from her murderous mother. What’s a girl to do when she runs away from home? Why, she joins the circus of course! Posing as a fraudulent soothsayer and going by the name of Cat the Great, Cat’s been able to stay off the radar for years. Too bad for her that mommy dearest isn’t the only person interested in dragging Cat back home, kicking and screaming …

This really shouldn’t come as a surprise, since Cat’s more than just your average mage or clairvoyant (of course). She’s the Kingmaker, a type of clairvoyant born every few hundred years with the power to detect any lies or disloyalty, and thus she can make kings rise – or fall. And the brilliant strategist and former warlord Griffin, known as Beta Sinta, wants Cat to ensure that his family’s reign will be long-lasting. Griffin’s sister is Alpha Sinta, the supreme authority in the Sintan territory, and she needs Cat’s abilities. And Griffin’s not going to take no for an answer.

We get to know Cat, Griffin, and Griffin’s most loyal men very well as the ragtag group makes their way – some more willingly than others – across the country to the capital. Cat doesn’t make it easy on Griffin and co., which I loved because I can’t enjoy a fantasy romance where the heroine meekly goes along with being abducted. Cat’s hostility begins to wane when the group proves that they mean her no harm, and in fact regret the circumstances that led them to capture her.

This being a fantasy-romance, the relationship between Cat and Griffin plays a huge role in the story. It was refreshing to read about these two because although Griffin can be high-handed and controlling, Cat never once lets him forget how powerful she is. She refuses to be controlled or to obey his commands – even when they make a lot of sense – because she values her independence so highly. I definitely ship it!

As fun as the romance was, I thought the world building in A PROMISE OF FIRE was the strongest part of the book. Inspired by the concept of ancient city-states controlled predominantly by those who use magic, there are constantly battles and assassination attempts from enemy territories to try and take control. The strict ruling hierarchy is inspired by ancient Greece (alpha, beta, gamma, and so on) and of course, the Greek gods are butting their heads in and causing chaos for their human devotees. Depending on who you ask, Cat is either terribly lucky or unbelievably unfortunate to have come to the attention of not one but three gods. Sometimes they help her out in dire situations with a power boost, but usually they seem to just saddle her with ominous prophecies and a seriously pressure-filled destiny. Cerberus, the three-headed dog that guards the Underworld, also makes a few grumpy, slobbery appearances.

The one aspect of the book that I didn’t enjoy is the prolonged emotional subterfuge that so often accompanies romance novels; however, the convention is that in a traditional romance novel, the protagonists come clean and unburden themselves by the books’ end. Maybe it’s because this is a fantasy-romance and a planned trilogy, but Cat is harbouring some pretty major secrets and although she agonizes over whether to tell Griffin for almost half the novel, she never actually does. That’s going to carry over into the sequel and cause some unnecessary drama, I’m sure.

Overall though, A PROMISE OF FIRE is one of the best fantasy-romance novels I’ve ever read. Amanda Bouchet’s writing is tight, and her dialogue is snappy – the banter (and bickering) between Cat and Griffin is especially hilarious. If you’re looking for a fun, interesting book that’s a bit meatier than your average beach read, then A PROMISE OF FIRE is for you. 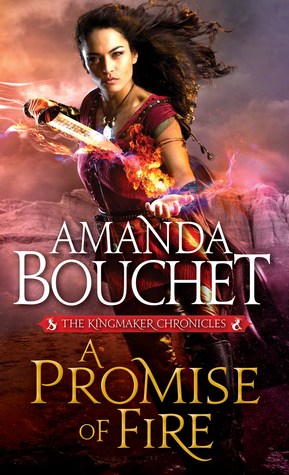