Down and Out in Purgatory by Tim Powers
Published by Subterranean Press on June 30th 2016
Genres: Horror, Urban/Contemporary Fantasy
Pages: 120
Our reviews of this author: Medusa's Web
Format: eARC
Source: Publisher
Thanks to Subterranean Press for providing me with a copy of this book in exchange for my honest review. This does not affect my opinion of the book or the content of my review.

Surreal, imaginative, and even a bit quirky at times, Down and Out in Purgatory is a strange journey through love and death. The journey through the underworld has been done so many times now that it’s not easy to inject any sort of originality into it, but that’s precisely what Tim Powers does here.

It all starts out with a somewhat perplexing trip to the morgue, followed by an even stranger trip off-road to a mobile home out in the middle of the desert. You see, when your entire life has been consumed by hatred for the man who stole (and murdered) the only woman you’ve ever loved, you can’t let something as simple as death stop you from seeking revenge.

The mechanics of contacting the afterlife are central to the story, merging low-tech with the old-fashioned occult. As for the afterlife itself, it’s a bleak and depressing landscape, populated by those souls who either aren’t ready or who simply refuse to pass on. There’s some philosophical discussion about what might come next, but this is not a story about Heaven or Hell, salvation or damnation. Instead, it’s all about the revelations to be found in Purgatory.

Needless to say, this is a dark, often depressing read. There are moments of bleak humor throughout, but Tom’s journey is not one to inspire hopes and dreams. If you’re looking for triumph over evil and the realization of true love, then look elsewhere. It’s a smart story, full of imagery and imagination, and the pulp-noir style of narrative really carries is along. It does suffers from a lack of backstory, making it hard to justify such desperate measures, but that also frees it from any expectations. The ending is just about perfect, tying up loose ends, but leaving a lot of answers to the reader’s own imagination.

Tags: Down and Out in Purgatory, Horror, Tim Powers, Urban Fantasy 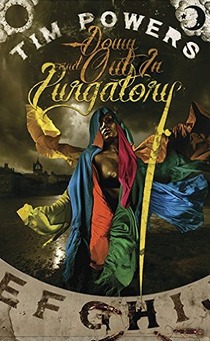