Disappearance at Devil's Rock by Paul Tremblay
Published by William Morrow on June 21 2016
Genres: Thrillers
Pages: 336
Format: eARC
Source: Publisher
Thanks to William Morrow for providing me with a copy of this book in exchange for my honest review. This does not affect my opinion of the book or the content of my review.

Having read lots of enthusiastic reviews for Tremblay’s A Head Full of Ghosts, I was eager to try his latest. Tremblay has a talent for establishing a creepy atmosphere with very little information to go on. The reader is given small brushstrokes—a glimpse of a shadowy form lurking in the dark, a face peering through a window, pages from a diary scattered on the floor—and then must piece these things together to form an idea of what’s happening. It’s a very effective writing style and creates some great tension, but it can also be frustrating when nothing really happens until the very end. Sadly, I found myself bored at times with Disappearance at Devil’s Rock, especially the middle parts between the exciting opening scenes and the final reveal. In all honesty, I did have a rather fractured reading schedule this past week, which rarely improves the flow of a story. But I felt uninspired to pick the book up when I did have time to read, which frankly, makes me sad. However, having said all that, Tremblay is a wonderful writer and his book touches on a topic that many readers will relate to.

The story opens at an emotional moment that anyone who is a parent will understand—Elizabeth Sanderson realizes that she hasn’t heard from her teen son Tommy in several hours. Tommy has gone to spend the night at a friend’s house, but his agreement with his mom is to text her right before he goes to bed, assuring her that all is well. When Elizabeth wakes up in the middle of the night with no text from her son, she immediately starts to panic—and with good reason. Tommy has gone missing after he and his friends spent a drunken evening in the nearby woods. With very little to go on, the local police begin an investigation into Tommy’s disappearance, combing the nearby Borderland State Park for any sign of him, especially an area known as Devil’s Rock where Tommy’s friends Luis and Josh admitted to hanging out. Meanwhile, Elizabeth is trying to keep it together for her young daughter Kate, but she’s afraid she might be losing her mind. One night she thinks she sees a shadow in her bedroom of someone who looks just like Tommy, and she has the sudden feeling that he is dead. Soon after, random pages ripped from Tommy’s diary start appearing on the floor in the living room, and Elizabeth is convinced that Tommy is leaving clues for her.

But the discovery of a man named Arnold who had been hanging out at Devil’s Rock with the boys and buying them beer puts a new spin on Tommy’s disappearance. Was Tommy abducted? Is Arnold involved? Or did Tommy simply decide to run away, in the spirit of his dead father who left the family years ago? The problem is, no one knows who Arnold is and how to find him.

Tremblay does a great job of evoking that horrible feeling that something awful has happened and there is absolutely nothing you can do about it. The reader feels as helpless as Elizabeth, as we slowly learn more about Tommy and his relationship with his friends, and later in the book, how his interactions with the mysterious Arnold might have something to do with his disappearance. Each chapter is told from a different character’s point of view, and so we get the story from many angles, a very effective device, especially for a mystery/thriller. And even the missing Tommy has his own chapters which are critical to the story, when Kate and Elizabeth find Tommy’s diaries and are able to piece together some of the moments right before he disappeared.

I enjoyed the characters, especially Elizabeth and Kate, who have lots of depth and emotion. Because Elizabeth is a single mother, she and Kate must rely on each other for support when Tommy disappears. Being a mother myself, it was easy to put myself in Elizabeth’s shoes and imagine the horror of having your child go missing, and I thought Tremblay did a brilliant job with her emotional state. I wasn’t as keen on Allison Murtagh, the detective who is assigned to the case. She felt rather two-dimensional and cookie-cutter to me, although I did like that the author chose to make the lead detective a female, so she could relate better to Elizabeth.

Tommy’s friends Luis and Josh were pretty well done, and they were critical to the story because they were the last people to see Tommy before he ran off into the woods. But they withhold information about that fateful night until almost the end of the story, and I wondered how realistic that was. I feel like thirteen-year-olds might be too intimidated by the police to lie about what happened, especially when Allison discovers an unexpected and brutal event that the boys were involved in.

And then there’s Arnold, the twenty-something man who “befriends” the boys at the 7-Eleven and starts to hang out with them, buy them beer, and regale them with urban legends about Devil’s Rock. As soon as Arnold appears—we find out about him in one of Tommy’s diary entries—the story completely changed gears for me, and I realized the book had veered into thriller/mystery territory instead of the supernatural tale I was expecting. Even though Tremblay did a great job with the abduction angle, and believe me, Arnold is creepy as hell, I was expecting this to be more of a ghost story and was disappointed when there wasn’t a twist at the end. There are subtle supernatural elements, but even by the end of the story, I was never really sure if they were real, or if Elizabeth was just imagining everything she thought she saw.

Some of my favorite scenes—the ones that I thought were really scary—were when Elizabeth decides to buy a security camera to try to catch whoever is leaving the diary pages in her living room. She and Kate use a phone app to control the camera and watch what’s happening in real-time, and because these scenes all take place late at night, they were suspenseful and completely terrifying. Tremblay is a genius when it comes to scaring you, even when nothing is actually happening!

I mentioned an act of random violence earlier, and I don’t want to give it away. But I do want to say that it really bothered me, not so much that it was violent, but that it felt completely out-of-place with the rest of the story. I’m still scratching my head at this weird event and wondering exactly what purpose it served, other than to add more of a creep-factor to the story.

And as a mother I have to say I was appalled at Elizabeth’s reaction when she learned that her son had been drinking beer with a strange man, and not only drinking beer but getting drunk.  Here is the part that really pissed me off:

Was it solely because of Arnold that Tommy started drinking beer? Thirteen years old is early for that, isn’t it? [Hell yes, woman!! It is!!] Were there kids drinking when she was in middle school? Probably, but she can’t remember any names of faces.

She’s just so apathetic about the whole thing! OK, rant over.

When Tommy’s fate is finally revealed, I wasn’t surprised at all. I did like the emotional moments at the end between Elizabeth and Kate, but by that time I had already made up my mind about this story. If you love a (mostly) subtle thriller with scary moments and some interesting characters, you’ll probably love Disappearance at Devil’s Rock, but for me, my expectations got in the way and I didn’t enjoy it as much as I wanted to. 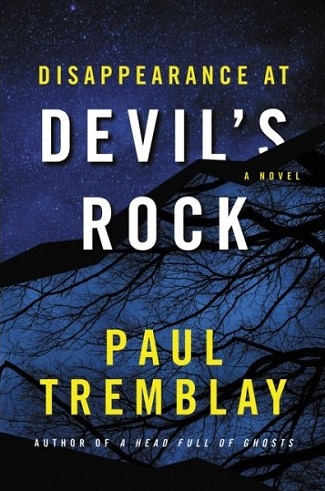