The Dragon Round by Stephen S. Power
Published by Simon & Schuster on July 19th 2016
Genres: Fantasy
Pages: 336
Format: eARC
Source: Publisher
Thanks to Simon & Schuster for providing me with a copy of this book in exchange for my honest review. This does not affect my opinion of the book or the content of my review.

The Dragon Round is a fantasy adventure with plenty going on and a protagonist hellbent on revenge.

At the start of the story we meet Jeryon, Captain of the Comber with plenty of experience under his belt.  He’s a fair man but also a company man through and through and one who believes in acting by the book.  Unfortunately as Jeryon and his crew are making a headland for home the shadow of a dragon appears on the horizon.  The choices are limited.  Hope the beast hasn’t spotted them, hope it’s simply not interested or engage in a fight with very little chances of success.  Jeryon favours the quietly, quietly approach in the hope that the dragon isn’t interested but it seems that certain members of his crew have different ideas and the temptation of a dragon and the wealth that all it’s component parts rendered down would bring seems too great an opportunity to pass on for some of them.  I won’t go into all the detail of what takes place next but the outcome is that Jeryon ends up with a mutinous crew, he’s given the captain’s chance and, accompanied by his apothecary known as Poth (who refused to take part in the mutiny), is set adrift in a dinghy with no drinking water, supplies or oars.  A pretty hopeless situation by all accounts.

It’s not a spoiler to say that after a fairly dire time and having drifted massively off any type of course, Jeryon and Poth find themselves on an island where their fortunes begin to change when they find a baby dragon.  It seems that dragons can be trained and with this knowledge Jeryon realises that a new escape is possible because when the dragon grows it will be able to carry the two off the island.

I had slightly mixed feelings about this book.  There were certain elements that I really enjoyed but certain other things that I wasn’t as keen on.

Firstly the characters.  We obviously spend the most time with Jeryon and Poth – or Everlyn.  I will start out by saying that this is in no way intended as a romance.  The partnership that gradually forms between the two is interesting to read as it develops but is definitely platonic.  In fact I would say that things between the two start off rather surly and gradually soften into one of mutual respect that blossoms into almost a family type unit feel when they have the shared care of their dragon.  Unfortunately I wouldn’t really say that I connected with Jeryon which was a shame and although I liked what I saw of Everlyn she didn’t really have enough page time – although I suppose that’s set to change in the next book.  On top of these two there are a whole host of characters ranging from sailors to ship owners to members of the Council.

The plot.  Well, it’s much more than it first appears.  There is of course Jeryon’s agenda which starts off as a search for justice but as the realisation dawns that justice will never be served this changes to one of revenge.  So, we have a situation whereby Jeryon hunts out those who betrayed him.  Parallel to that we have a conspiracy by certain characters of power within Hanosh who plot to start war.  Hanosh is a corrupt place where greed and avarice rule and life is cheap.

The world building.  I wouldn’t say that I have a really firm grip on what’s going on with respect to the world at the moment and I think that needs a little bit more exploration.

This is definitely a book that gave me mixed thoughts.  There’s plenty going on and lots of action, I’m not quite sure the writing style worked for me as it gave some of the action scenes a bit of a running commentary type of feel and that meant it lost a little bit of the excitement.  There was also a lot of characters and switches in POV.  Personally it felt like there was such a lot going on that the characters and the world building suffered a little.

Now, I don’t want that to sound overly critical.  This book definitely has positives.  I enjoyed the chapters on the island where Jeryon and Everlyn learnt how to deal with the huge crabs and the training of the dragon, I also thought the final chapters spent in Hanosh were full of intrigue although they do take on a bit of a brutal tone.

I think my main issue was a lack of connection with Jeryon.  I struggled to understand how he could be so intelligent for parts of the story but then seemed to rush headlong into things that he should have thought more carefully about at other points plus I didn’t really agree with all the actions he took in the latter chapters.  I have to hand it to Powers though for coming up with a very surprising ending that I certainly didn’t foresee.

I didn’t dislike The Dragon Round but it didn’t quite sweep me off my feet as each time I started to feel a connection something knocked me off course.  It wasn’t quite the dragon adventure that I was looking for but I think that could be due to my own expectations going into the story. 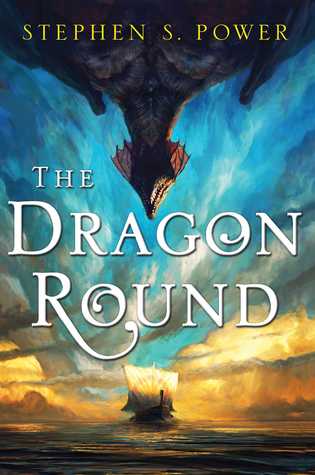