Pride's Spell by Matt Wallace
Series: Sin du Jour #3
Published by Tor.com on June 21 2016
Genres: Fantasy
Pages: 240
Format: eARC
Source: Publisher
Thanks to Tor.com for providing me with a copy of this book in exchange for my honest review. This does not affect my opinion of the book or the content of my review.

Matt Wallace’s Sin du Jour series is back with another great installment, and this time around the action is crazier than ever! If you haven’t started this series, I recommend starting at the beginning and reading the novellas in order, simply because Wallace sometimes references events in earlier books. Also, we get to know the characters better as the series goes along, and it’s fun to see each person grow and develop. In case you’re new to the series, Sin du Jour is a catering company that caters to the supernatural crowd, and while you may think that catering is a bland and safe occupation, there is nothing remotely safe about the jobs that Sin du Jour takes on. And that’s what makes these books so addictive. Each installment has the Sin du Jour gang working on a different catering job, and in Pride’s Spell it’s a movie premiere after-party. That’s right, the New York-based company is heading to Hollywood, giving Wallace a fantastic opportunity to skewer the movie business with his particular brand of snarky humor.

When the story opens, executive chef Bronko has booked his catering crew into two different events at the same time, on two different coasts. And so for the first time, we see the gang split up, as he sends Jett and Nikki to Los Angeles to handle the after-party for a top movie premiere, and leaves Dorsky in charge of the New York event, catering the TaurusCon gala.  As Nikki and Jett prepare for a lavish, over-the-top dessert experience for the actors and producers, Dorsky and his chefs are elbow deep in dishes designed for different supernatural creatures: goblins, centaurs and minotaurs. But smooth sailing just isn’t in the cards for Sin du Jour, because while the food may be unusual and delicious, someone has targeted every member of the company, and suddenly, everyone is under attack.

But who’s behind the attacks? And why? It turns out someone is out for revenge, and that revenge is coming from a direction they weren’t expecting.

Wallace gets the chance to poke fun at the movie industry, and he’s got plenty of material to work with. I loved the scenes at the party where Nikki is at first excited to meet celebrities, but later she’s bored by how boring they actually are. The action goes back and forth between the caterers and the producers associated with the movie. It didn’t surprise me at all to find out that they are making sacrifices to dead movie moguls in order to secure success for their projects:

Back at Sin du Jour headquarters in New York, though, individual crew members are being attacked by, believe it or not, the Easter Bunny, Cupid and even Santa and his maniacal reindeer. This crazy assembly of demons disguised as holiday icons was waaay over-the-top, but pretty damn funny and creative. I’m still not sure where the holiday-themed demons fit into the rest of the story, but I decided to just roll with it, since Wallace has a way of making the absurd seem almost normal.

There were a few surprisingly emotional moments in the story, and we get to know some of the characters a bit better. For example, we learn that chef Cindy has a penchant for collecting designer clothes, but she never wears them. (And then something awful happens, and well, she’ll never get the chance.) There’s also a very sweet moment near the end that I can’t really tell you about because of spoilers. (But trust me, if you’ve read the first book, Envy of Angels, you’ll love this moment too!)

But mostly this story is full of action, carnage and violence, and plenty of awesome dialogue. From what I understand, four more novellas are planned for this series, and I couldn’t be happier. 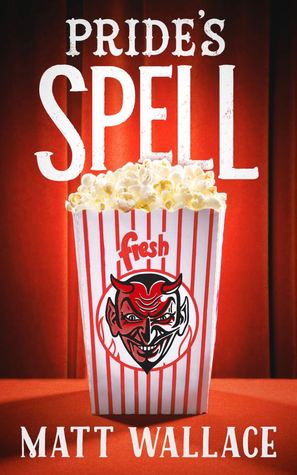