Central Station by Lavie Tidhar
Published by Tachyon Publications on May 10 2016
Genres: Science Fiction
Pages: 290
Format: eARC
Source: Publisher
Thanks to Tachyon Publications for providing me with a copy of this book in exchange for my honest review. This does not affect my opinion of the book or the content of my review.

I went into Central Station completely blind, which is sometimes the best way to experience a book. So after a few chapters of seemingly unrelated characters and events, I finally caught on that this novel is a series of interconnected stories whose characters circle around each other, now and then crossing paths, each one unexpectedly connected to the next. As the story unfolds, the reader is introduced to the people who live in Central Station, a buzzing, hub-like city that reaches high into the clouds, a place of arrivals and departures, as people leave from the spaceports to Mars or Titan. My initial puzzlement in the beginning soon turned into delighted amazement as Tidhar’s unusual world began to unfold. If you’re looking for an action-packed adventure, heavy on plot, then Central Station will disappoint you. There is very little plot to be found here, although there is a central mystery that threads its way through the chapters. What you will get, though, is just as good: incredible world-building, beautiful writing, and emotional moments between characters that celebrate what it means to be human.

Set far in the future, each chapter introduces us to a new character and explains his or her relationship to Central Station, a border town that sits in what we would call the Middle East. We first meet Miriam Jones and her adopted son Kranki, who have come to the base of Central Station to wait for Kranki’s father. Boris went to Mars years ago, but something has brought him home to Earth, and now the three have a reunion of sorts, but like all good stories, the reader doesn’t yet understand who these people are. In subsequent chapters, we meet the rest of the players: Isobel, a young girl who has fallen in love with a robotnik named Motl; Carmel, a strigoi, or data vampire, who does not belong on Earth, and yet she was able to follow Boris home from Mars; Boris’s father Vlad, who is dying and wants nothing more than to control his own death; Miriam’s brother Achimwene, who loves old books and joins Carmel in her quest to discover the purpose of the strigoi; and Weiwei Zhong, Boris’s ancestor who long ago made a deal with the Oracle to preserve his memories forever. Slowly, the relationships among all these people start to emerge.

Surrounding the characters is Tidhar’s wonderfully unique vision of the future (or perhaps a warning of where we may be headed!). Humans grow up “noded,” with a sort of built in access to the Conversation, an internet-like construct that allows constant access to all information, like plugging our minds directly into the internet and never being able to escape the constant rush of information. People smoke ubiq cigarettes that have high density data encoded into the smoke, which delivers instant knowledge to the smoker. Those searching for religion can take a drug called Crucifixation, a pill that makes you see God. (Best name for a futuristic drug ever!) Gamers can strap themselves into pods and spend hours immersed in fantastical worlds (OK, maybe that idea’s been done before, but still. Cool!)

And describing all of this is Lavie Tidhar’s poetic and flowing prose, something that I don’t see enough of in speculative fiction. He revels in the senses, evoking smells and tastes so vivid that I knew exactly what he was talking about:

The Shambleau called Carmel came to Central Station in spring, when the smell in the air truly is intoxicating. It is a smell of the sea, and of the sweat of so many bodies, their heat and their warmth, and it is the smell of humanity’s spices and the cool scent of its many machines.

At times I completely lost track of the story, simply because I was enjoying his writing so much.

With so many interesting characters, I still had my favorites. My most favorite was Carmel, the strigoi. I’m a sucker for vampires, and I was thrilled to find a science fiction tale with a vampire as a main character, which was completely unexpected. Like the traditional vampire, Carmel has an unquenchable hunger that can only be soothed by biting humans. But rather than blood, she drains them of their memories and knowledge; she craves information and data. But when she meets Achimwene, one of the rare “unnoded,” she is unable to get anything from him, since he isn’t connected to the Conversation. I loved that even though Carmel is dangerous, she still has insecurities and is far from happy with her life.

Every science fiction story needs robots, and Central Station’s version is the robotnik, humans who were modified with mechanical robotic parts and sent to fight in the war. Motl is one such creature, a man who has returned from war but is shunned by others. Robotniks seem to be Tidhar’s version of today’s veterans, who often come back from service both mentally and physically damaged. Motl not only struggles to find his place in Central Station, but he’s fallen in love with a human, which really complicates things. I loved the “forbidden” romance between Motl and Isobel and the fact that being around Isobel is causing Motl to have memory flashes of his human life, before he was modified.

One of my favorite chapters was “Vladimir Chong Chooses to Die,” in which Boris’s father Vlad, who is suffering from the memories passed down to him, thanks to his ancestor Weiwei, is distraught over the fact that he can’t remember his wife’s name, and so he has checked himself into a suicide clinic. It’s a grim—but strangely practical—idea that someone who is dying anyway can make a choice about how they die. I won’t tell you what happens to Vlad, only that his story is both joyful and sad. This chapter in particular is a perfectly contained story, and could easily stand on its own.

In fact, each chapter in Central Station was first published as a short story, and Tidhar has gone back and reworked them into a collection that paints an intriguing picture of a group of diverse people who are simply trying to survive. In other words, it’s sort of like real life, but with robotniks and tentacle junkies and Martian parasites. Tidhar shows us through his characters how important—and inescapable—history can be. I hope he writes more stories set in Central Station, because there is so much more I want to know. 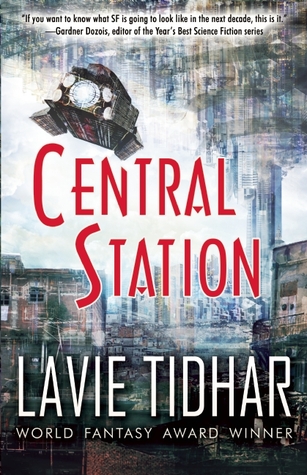