Company Town by Madeline Ashby
Published by Tor on May 17th 2016
Genres: Science Fiction
Pages: 288
Format: Finished hardcover
Source: Publisher
Thanks to Tor for providing me with a copy of this book in exchange for my honest review. This does not affect my opinion of the book or the content of my review.

I was so excited to finally get my hands on Company Town, a book which had been on my to-read list for years going back to the days since it was first announced by Angry Robot. While the original publisher’s sale followed by the novel’s move to Tor resulted in a significant delay for its release, I have to say the wait was absolutely worth it. I was already a fan of the author, having read her seriously imaginative and seriously twisted novel vN set in an age of self-replicating synthetic humans, but with Company Town Madeline Ashby delivers a whole other level of storytelling genius.

The book takes place in New Arcadia, a city of floating towers surrounding a dilapidated oil rig in the North Atlantic just off the east coast of Canada. Three years after a major accident shook up its residents, new life has returned to town in the form of Zachariah Lynch, patriarch of a wealthy family of energy barons who buys up the place and begins development of an alternative reactor under the waves.

Our protagonist Go Jung-Hwa works as a bodyguard for the United Sex Workers of Canada, accompanying her charges to appointments with their clients. The sex trade may be a highly regulated industry in New Arcadia, but that doesn’t mean the girls don’t need protection. Because Hwa was born with Sturge-Weber Syndrome, her mother deemed it “a waste” to invest in any augmentations for her daughter, so as a result, Hwa is one of the few people in the city completely free of bio-engineered enhancements. In spite of this, she is adept at self-defense and is no stranger to getting into scraps, making her very good at her job.

Eventually, her talents come to the attention of Zachariah Lynch himself, whose fifteen-year-old heir Joel has been receiving death threats. Taking an immediate liking to the kid, Hwa agrees to work for the Lynches, becoming Joel’s personal bodyguard. However, her sudden career change could not have come at a worse time. Women from around town, all sex workers and Hwa’s old friends, are turning up murdered. The timing of these incidences are just way too uncanny to be coincidental, making Hwa wonder if the killings and the threats against Joel might be all related.

This was a highly addictive read, literally a book I couldn’t put down. I kept making excuses for myself not to stop reading (“Sleep? Who needs sleep?”), and as a result I ended up finishing this over two or three sessions in a little more than a day. I enjoyed everything about this novel, from the phenomenal world-building to the irresistible mystery surrounding the story. I also found the characters likeable, especially the protagonist Hwa, whose personality was positively magnetic. She’s definitely not one to hide her feelings about her condition and the associated port-wine stain on her face, wearing her fears and insecurity on her sleeve. However, she is also emotionally and physically strong, having weathered all kinds of challenges on her own without any help. Knowing that she’s different and living with a disorder that could incapacitate her anytime has not slowed her down. She’s a character you can sympathize with but not pity, someone whose self-doubt does not inhibit her from doing what she knows is best for herself. Despite having a rough life, she can still see the humor in things, as well as the good in people. It is this that ultimately leads her to accept the job protecting Joel Lynch, who is nothing like the “rich kid” stereotype. His personality appealed to me immediately as well, winning me over with earnest charm and innocence.

Then there was Daniel Síofra. Mere words cannot describe how much I love this character! As head of Joel’s security detail, he’s also Hwa’s boss. There’s actually a thread of romance here that took me by surprise; it is not strong nor is it a big part of the story, but nevertheless it’s one of the most satisfying romance arcs I have ever read. That incredibly intense moment where Hwa finally opens up emotionally to Síofra, the first time she has ever done that with anybody, practically had me melting into a puddle on the floor.

But while characterization was by far the strongest point, the story didn’t disappoint either. Sure, at times there was a bit too much going on, and I’m still trying to sort out my feelings about the ending (which had a mind-blowing twist!), but overall there’s no denying the allure of this mystery. The suspense was what kept me reading long into the night.

All told, I loved this book and wouldn’t hesitate to recommend this to fans of futuristic sci-fi and mystery. Hwa’s not your typical sleuth but she’s brilliant and accomplished in her own way, protecting those who can’t defend themselves. A fascinating setting along with an amazing cast of characters made Company Town an unforgettable read. 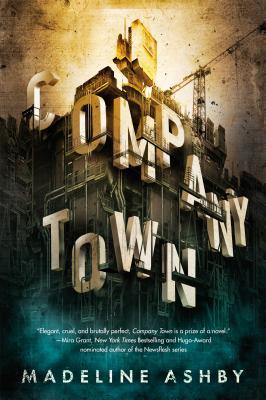