Children of Earth and Sky by Guy Gavriel Kay
Published by NAL on May 10th 2016
Genres: Fantasy
Pages: 592
Format: ARC
Source: Publisher
Thanks to NAL for providing me with a copy of this book in exchange for my honest review. This does not affect my opinion of the book or the content of my review.

Children of Earth and Sky is Kay’s latest novel, set in war torn lands. The cast is comprised of a variety of characters, characters that are unlikely companions, crossing paths only by chance. As with Kay’s other books, this is set in a fictional land/world, but quite closely matches our own.

There are a good number of characters in this, but I think it works well as it helps give perspectives and information from a variety of sources. This always helps paint a broader picture. That said, some readers may find it breaks the flow of the story a bit as the story is often jumping from one story to another. Personally, this is not an aspect that bothers me but I do know some readers prefer a more constant source for the story. As one might expect, this world can brutal, and there are great hardships that help steer our characters onto their current courses.

Danica is a determined young woman, set of on vengeance for the loss of her family. She is fiercely independent and not afraid of calculated risks. Honestly, she does not seem to fear much in this world. Perhaps that comes from losing so much. At some point, what is left to fear when everyone you love is dead or taken? She is also extremely talented with the bow and has worked to earn her place among the raiders (pirates) of Senjan. This sets her on her course for the book, her life never to be the same. I found Danica’s character very likable, but as a reader, it could be hard to see her almost always choose the course of vengeance over anything else her life. She is young and determined, which can be extremely good and give her character determination to overcome barriers. But at some point you also wonder if it is also a cause of blindness, even if she can see a more sensible or safer path, that is not her, that is not what she is living her life for. I had to respect it even if I wanted something different for her at times.

Marin is the younger son of a successful merchant. He has a bit more freedom than an older son who is tied down with more expectations and commitments. You could sum him up as a handsome ladies man; One that may be seen climbing down from the windows of young women. But he is more than just that. He is very likable and relatable. He sails with his crew and you see he has a level of respect for those that work with him, and he is every bit as willing to work as they are. He is not a lazy commander that only doles out work without thought of his own part in things. He also has a very keen eye for reading people and situations, a skill which serves him quite well at crucial times.

Pero is a struggling artist. One that has been given the chance of lifetime, to paint the grand khalif. Seeing as he is from a land that is not under the khalif’s reign and so will be considered an infidel by the khalif and all in that land, this is also a very dangerous task. One that he is quite aware he may not return from. I really enjoyed seeing the world through Pero’s eyes. He has not been to war and while he may have been a bit down on his luck, he has been spared many of the hardships some others have faced.

There are many characters in this book, so I may not highlight them all. There is also a young woman who has shamed her family by conceiving a child out of wedlock with a young man deemed not worthy of her. Her father is far from a forgiving a man and has sent her to live her days out as part of a secluded religious order. She unexpectedly receives an offer to leave that life her father arranged for her and serve as a spy. The contingency is that she must pretend to be married to a doctor she has does not know. We quickly see she is quite bright and resourceful. And then there is also a young man quickly rising through the ranks to serve the military for the grand khalif. The price he pays to get there is harsh, as one may expect for the life an elite soldier trained from a very young age.

All of these characters were intriguing to me. I wanted to know what happened with everyone, and I wanted them all to find happiness and success.

My only complaint for this book is that there were some of sections where the pacing really slowed for me. They were areas where I felt the focus was more on giving historical or strategical background. They may have helped for understanding the greater picture, but they also were much dryer to read. I felt my self impatient to get back to the actual characters I had been following. The good news is that means I was very invested and interested in the characters. I just would have preferred if the information in certain places could have been presented more naturally within their storylines.

The fantasy element to this is minimal but does add an interesting element. This is not a story of magic by any means, it is the story of people surviving through wars and conflicts. People trying to find happiness and peace in a world that can make that harder than it should be, a world full of loss and war. While this story has many tales of tragedy, it brings with them a great sense of hope and love, recovery and survival. It is a story of perseverance and acceptance; Taking what life you have been given and learning to make the most of it before you find it is too late. Children of Earth and Sky is a touching novel that highlights the importance of picking up the pieces and appreciating what you can make with them. 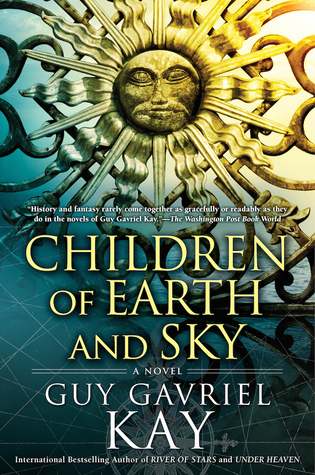