City of the Lost by Kelley Armstrong
Series: Casey Duncan #1
Published by Minotaur Books on May 3rd 2016
Pages: 416
Source: Publisher
Thanks to Minotaur Books for providing me with a copy of this book in exchange for my honest review. This does not affect my opinion of the book or the content of my review.

City of the Lost is the first book in a new series from Canadian mega-author Kelley Armstrong; unlike the majority of Armstrong’s works, this book is a thriller without any obvious speculative elements. Set in the northernmost territory of Canada, the horror in City of the Lost comes not from the supernatural, but from the horrors people will commit when removed from the constraints of civilization.

To save her best friend Diana and escape her troubled past, homicide detective Casey Duncan agrees to an insane proposition: in exchange for her crime-solving skills (and a “small” fee, of course) Casey and Diana will be erased, disappearing from society into an off-the-map settlement called Rockton. A community of approximately 200 people, Rockton is a safe haven for those who need to escape. With no internet access, no electricity, and no marked location, Rockton truly is the city of the lost.

The setting of City of the Lost is so crucial to the story that it’s almost a character unto itself. Inspired by a family vacation Armstrong took to the Yukon, this novel showcases Canada’s stark northern beauty. Surrounded by the tundra and boreal forests, Rockton is a cross between a frontier town and a secret military base. Ostensibly run by Sheriff Eric Dalton, Rockton is essentially under martial law and at the mercy of the police force. But some of the recent additions to Rockton aren’t who they say they are…and the mysterious council that approves residency may have a more dangerous agenda than even the perpetually suspicious Casey could have anticipated.

It’s not long after Casey arrives in Rockton that she realizes the town and her new neighbors are much more than meets the eye. How does a remote northern community have such a steady supply of illegal drugs? Why does the borderline-puritanical Sheriff Dalton allow the operation of a brothel? And for such a small population, why has Rockton always had such a high murder rate? Casey will have to use all her detective skills and her killer instincts to crack this case, but the truth about the recent string of murders will change her worldview forever.

City of the Lost features a cast of compelling characters you can’t help but root for, despite the fact that none of them can be considered strictly “good people.” Casey especially struggles with the mistakes of her past and her penchant for vigilante justice. Sheriff Dalton cares deeply for the people of Rockton and the town’s success, yet he isn’t above police brutality to get the answers he needs. Our two leads aren’t the only morally grey characters, and Casey’s new, tenuous friendships with the residents of Rockton will be tested by the dark secrets she uncovers about their pasts.

Tense, unsettling, and tightly written, City of the Lost is Kelley Armstrong at her best. As a long-time fan, who’s read more than 20 of her books, I feel confident saying that City of the Lost is her best book in years. If Armstrong’s work intrigues you but you’ve been intimidated by her multiple long-running series, then City of the Lost is the perfect place for you to start with her oeuvre. Recommended for fans of psychological thrillers, mysteries, and atmospheric novels. 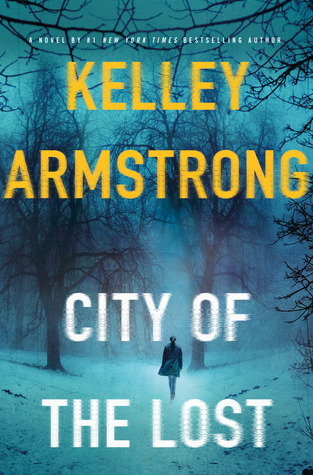