The Silent Army by James A. Moore
Series: Seven Forges #4
Published by Angry Robot on May 3rd 2016
Pages: 400
Our reviews of this author: City of Wonders
Format: eARC
Source: Publisher
Thanks to Angry Robot for providing me with a copy of this book in exchange for my honest review. This does not affect my opinion of the book or the content of my review.

The Silent Army is the fourth installment of what is turning out to be quite an epic fantasy series by James A Moore.  If you haven’t started the series yet then please be aware that this review will undoubtedly contain spoilers for the previous books in the series.  Also, if you do plan on starting this series I would strongly suggest starting from the beginning in order to really get a feel for all the characters and their different allegiances.

The conclusion of the last book was incredibly dramatic with the Silent Army rising to defend Canhoon (or the City of Wonders, as it is also known) against attack from the Sa’ba Taalor.  At the same time the army of the Sa’ba Taalor are on the move, their strategies are in place and although the events at the conclusion of No.3 caused them a momentary blip nothing is unsurmountable to them.  Or at least so it seems.  Ruthless, determined and with their Gods constantly feeding them guidance they are a force to be feared and they sweep across the land terrorising and transforming it in their wake.

Meanwhile we become re-acquainted with Andover Lashk and his companions who travelled to The Mounds to find out their secrets and probably found out a little more than they bargained for.  Andover is finally coming to terms with his own destiny.  He’s changed massively since we first met him and is no longer the quiet and fearful character who was so easy to beat into submission.  His companions – Tega, Nolan and Drask have all been equally affected by the Mounds and are also trying to understand what exactly these changes mean for them and the role they will play in the future.

The City of Wonders is also undertaking it’s own personal journey.  As well as trying to formulate war strategies and protect all the people that have flooded into Canhoon it seems that the City is experiencing it’s own difficulties in terms of mysterious deaths, riots and poisonings.

It is difficult to review this book without giving too much away.  Again Moore manages to pull a number of completely unexpected surprises out of the bag – particularly towards the end of the book – which give a whole new meaning to the war that is taking place.  Maybe everything isn’t quite as it first seemed and I’m certainly keen to read on and find out more!  I’m assuming (or hoping) that there is more of course.

What I can talk about is the Silent Army which I thought was a great creation.  A stone army that can literally melt into or appear out of the stone walls.  As an army they are quite formidable, they don’t bleed and they feel no fear – however, the slight drawback is they seem to dance to their own tune.  That being said, at the moment their own motivations seem to be to protect the Empress so that makes them a great asset.

I won’t go into too much more detail.  I can say that this story seems to become more intriguing with each instalment, in fact this is far from what it at first appeared to be – a story of war driven by the desire to seek revenge.

This is another strong book in the series.  On balance, I wouldn’t say it’s my favourite out of the series, it has a little bit of a feel of getting from one place to another place in order for another revelation to be made.  But, in spite of that this is still a strong instalment with no shortage of action and Moore is excellent at writing dramatic fight and battle scenes.

I would certainly recommend this series. 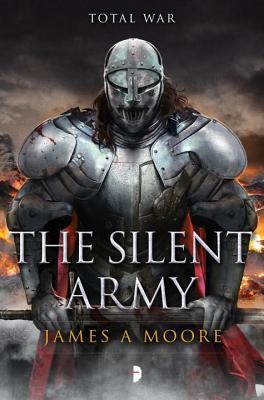