Sharp Ends by Joe Abercrombie
Published by Orbit on April 26th 2016
Genres: Fantasy
Pages: 304
Format: ARC
Source: Publisher
Thanks to Orbit for providing me with a copy of this book in exchange for my honest review. This does not affect my opinion of the book or the content of my review.

The full title of this anthology is actually Sharp Ends: Stories from the World of the First Law, so fans of Joe Abercrombie’s novels set in this universe should be in for a treat. All thirteen tales in here are set in the Circle of the World, spanning a period that starts about a decade before the beginning of The Blade Itself and ends a few years after Red Country, and some feature locations and characters that have appeared before in his novels. Most of the stories in here have also been previously published in other places, but here they all are for the first time, collected together in this neat and convenient little package, along with some new content besides.

I must confess here though, that these types of anthologies aren’t typically in my scope but of course I had to make an exception for Sharp Ends because Abercrombie is one of my favorite authors! When I pick up a collection of short stories, I usually go for those that are made up of standalones and original tales rather than the ones containing shorts/novellas which tie into an existing series’ “universe”. In general, if I’m going to spend time with characters I already know and in worlds I love, I want my stories with a bit more meat. This, I believe, was my main issue with Sharp Ends. Even though I’ve read all of Abercrombie’s novels, which should have put me in a pretty good position to appreciate this anthology (whose stories are all new to me), I didn’t enjoy it as much as I had expected. The truth was many of the stories in here left me feeling like there should have been more to them.

To its credit, I really enjoyed how the book was structured, with the stories more or less organized chronologically, so that all together they created something very close to a narrative. If it’s possible for this anthology to have “main protagonists”, they would most definitely be Shevedieh and Javre, the thief-and-warrior duo who star in many of the stories and when they do they’re always the highlights. Their escapades, chronicled in tales such as “Small Kindnesses”, “Skipping Town”, “Two’s Company”, “Three’s a Crowd” and “Tough Times All Over”, create a kind of thread to hold on to as other stories are interspersed throughout the anthology. The two of them are a lot of fun to read about. My favorite is “Two’s Company”, a free short that was originally published at Tor.com featuring our two heroines trekking through the barren north and encountering the Northman Cracknut Whirrun in the middle of a narrow rope bridge. This one’s got everything—action, violence, humor, sex, you name it—and I was not surprised to find out afterwards that Abercrombie had meant for this story to form the spine around which all the other stories are arranged.

With the exception of “Two’s Company” though, none of the other tales really resonated with me on their own. Individually, I don’t think the rest of Shev and Javre’s stories would have jumped out at me either, and only when the five were taken together did they make an impression because I was able to form a connection with the two characters as soon as I determined them to be the heart of this anthology. From their first meeting to their final story together more than a dozen years later, their relationship has weathered through countless adventures, challenges and hardships. In the end, it was a very beautiful and heartfelt moment to see how the two friends have come to be where they are and how they’ve been good for each other.

Alas, other tales were not so memorable, and there were more of these than I would have liked. Just days after finishing this book, I could barely remember much of what happened in “The Fool Jobs” and “Hell”, for example, and there were stories like “Freedom” or “Wrong Place, Wrong Time” which were interesting but ended in a way that I felt were neither here nor there. Most disappointing were the stories that featured some of my favorite characters in the First Law world, like Sand dan Glokta (in “A Beautiful Bastard”), and of course Shy, who was the protagonist of my favorite Joe Abercrombie book ever, Red Country. I was probably most let down by her story “Some Desperado” especially since it was the one I was most looking forward to, but unfortunately it lacked substance and I just didn’t find it all that compelling.

Still, I have to stress that the majority of the stories in here were decent to good. Among my other favorites were “Yesterday, Near a Village Called Barden” and the unsettling closer “Made a Monster”. Like I said, I’m not an experienced anthology reader so my mixed feelings on this book ultimately came down to personal taste and my too-high expectations because it was Joe A. In fact, reading this book only managed to further sharpen my desire to read another full-length Abercrombie novel (perhaps, even one about the dynamic duo of Shev and Javre? One can dream, I guess…)

Because it would also help immensely to have a bit of knowledge about this world before diving into Sharp Ends, newcomers to Abercrombie’s work will probably want to start with the novels as well, and a great place for that would be the First Law trilogy which I highly recommend. But for those who are already familiar with all those books, if you’re also the type of reader who enjoys checking out all the novellas and/or short stories that are companion to a favorite series, then you’ll definitely love this collection and want it to complete your bookshelf. 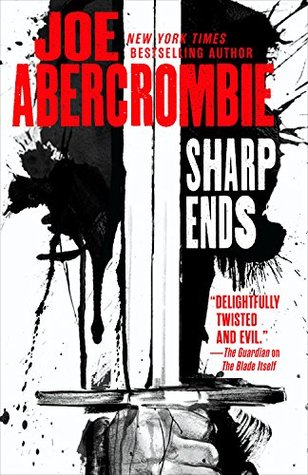