Saint's Blood by Sebastian Decastell
Published by Jo Fletcher Books on June 7th 2016
Genres: Fantasy
Pages: 400
Format: eARC
Source: Publisher
Thanks to Jo Fletcher Books for providing me with a copy of this book in exchange for my honest review. This does not affect my opinion of the book or the content of my review.

Talk about your emotional roller coasters. I started out clutching the side of my e-reader with anticipatory glee, loving the sheer excitement of each new development . . .  until I hit the point where I wanted to hurl it across the room as I cursed the name Sebastien de Castell . . . before I found myself holding it in shaky hands as I bravely tried to deny that a book was on the verge of making a grown man cry.

“Time to stick the pointy end through the bad man’s heart.”

If you thought the first two books were great (and Knight’s Shadow was one of my favorite books last year) then be prepared to have the bar raised impossibly high with Saint’s Blood.

Falcio suffers more here than any other hero in recent memory – and that’s saying something, considering what he endured with the Greatcoat’s Lament last time around. He’s still suffering from that torture as the book begins, haunted day and night by his seemingly endless torment . . . and his anguish just gets deeper. He’s a man both physically exhausted and emotionally broken, kept alive by nothing more than the slender threads of love and devotion. Even that’s not enough, however, as de Castell ultimately pushes him beyond the brink in one of the most surprising scenes in the series.

As deeply as Falcio suffers, however, it is Kest’s story arc that proves to be the most tragic. We already saw a bit of how he suffered the loss of his hand (and sainthood) in the last book, but here we see just how deeply he’s been wounded. This is a man irrevocably changed by his experience, but the manner in which he endures, and the reasons he continues to suffer, will serve to define the future of his homeland. More than just a Saint of Swords, more than just a Greatcoat, here is a man destined to take on a God.

Having said all that, it is actually Brasti who is mercilessly tasked with committing the most painful act of all – and not out of vengeance or duty, but out of love. I won’t say anymore, but it was that act that had me cursing the name of Sebastien de Castell so violently. Brasti has always been the heart of the series, but never moreso than in this third fateful chapter of the series.

I thought Knight’s Shadow did a stellar job of advancing the mythologies and world building of the series, but it’s here that everything begins to come together. It’s a story that begins with the death of Saints and the introduction of the Inquisitors, and which goes on to see Falcio himself begin to question his most deeply held beliefs about gods and magic. I wasn’t sure where the story was headed, and actually had some concerns about what I feared was a looming thematic shift, but I loved the way it came to explore questions of faith and the law. By the time we get to the end, and come to understand the rules of the much larger duel being played out across the land, you cannot help but feel the need to stand up and applaud.

It is there that Aline, Valiana, and Ethalia shine the brightest, but I don’t know how to even begin to address their roles without getting into spoiler territory. Instead, I’ll just declare that we have heroines in this book who can stand just as tall as the heroes, if not taller.

Saint’s Blood is one of those books that is so good, you almost mourn the fact that whatever you read next is going to suffer by comparison. The character growth is stunning, the advancement of themes indescribable, and the escalation of tension to unimaginable heights breathtaking. I have no idea how de Castell can possibly top this, but you can be assured I’ll be there to watch him try. 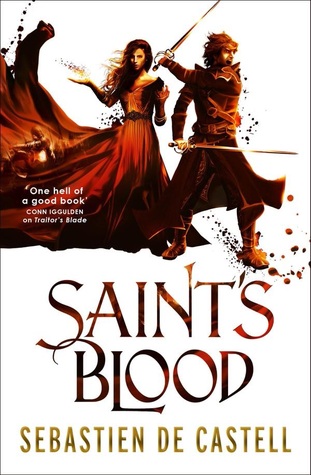