Almost Infamous: A Supervillain Novel by Matt Carter
Published by Talos on April 19th 2016
Genres: Science Fiction
Pages: 328
Format: ARC
Source: Publisher
Thanks to Talos for providing me with a copy of this book in exchange for my honest review. This does not affect my opinion of the book or the content of my review.

To get a sense of the zaniness you’re in for, just take a peek at the book’s first few pages, featuring a “Brief History of Superheroes.” Super powers—whether you were born with them, cursed with them, granted them as a result of radioactive freak accident, changed by a gene-splicing experiment gone wrong, and so on and so forth—are just a common fact of life. Superhumans are real. Oh, and by the way, so are Atlanteans, Lemurians, magicians, aliens, demons, golems, mortal gods who walk the earth, and pretty much every kind of power-endowed beings you can think of. All real.

Over time, these powered-individuals have altered the course of history and changed the face of the earth. Some of them have used their abilities for good. Others, not so much. In 1969, the conflict between the “good guys” and the “bad guys” came to a head, kicking off the War on Villainy. After more than twenty years of fighting, the Heroes eventually prevailed, neutralizing the last real threat. With supervillains more or less eradicated, people of the world today live in relative peace and safety, watched over by an international superhero team called the Protectors.

All that changes the day eighteen-year-old Aidan Salt decides to put on a cheap homemade costume and an old motorcycle helmet, dubbing himself the supervillain Apex Strike. However, his first act of villainy goes completely wrong, and soon after, he is captured by the Protectors. To his surprise though, instead of locking him away, the superheroes make him an offer: a chance to participate in a secret operation called Project Kayfabe. The world has not seen a real supervillain in decades, and superheroes are gradually losing their relevance. They need Apex Strike and others like him on a fake supervillain team in order to stage elaborate mock battles and kick start their popularity once more, showing the world why it still needs its heroes.

This is where the description of the book is a bit misleading, because it makes it sound like Aidan was just handed the job. In reality, dozens of supervillains are vying for a spot on the this team, and the first part of the novel is actually a hilarious reality show-type competition, where the “judges” of Project Kayfabe put their “contestants” to the test before narrowing the field down to the final seven. It was not at all what I expected when I picked up this book, and it was fun and exciting to meet all these other supervillains (all with powers ranging from the very cool to the very ridiculous) and then trying to guess who will end up making it to the end of the trials with Aidan/Apex Strike (whose spot on the team is a given). The results were entertaining and sometimes surprising.

The best part about this book is the world that the author has created. As a nod to the superhero comics we know and love, it feels instantly familiar, but at the same time it’s also offbeat and unique. Matt Carter makes a lot of pop culture references and parodies superhero movies and comics to great effect. I especially loved the little flavors that were thrown in, like the “Supervillainy 101” anecdotes inserted at the end of each chapter. I always say that it’s the little things like that which make a huge difference, and this case, they help Almost Infamous stand out from other superhero novels that don’t spend near as much time and effort on the world-building.

Perhaps my only criticism is the protagonist. Some characters and I simply start off on the wrong foot. Most of the time, through growth and development of the character, I end up warming up to him or her, but sadly this was not the case for Aidan Salt. He is spineless. He is naïve. He is unambitious. He chose to be a supervillain, because being a superhero is too much work and he’s just too lazy. And the only reason he wanted to become famous is because he thought that would help him get laid!

Now, one can argue that Aidan isn’t meant to be likeable character. For fans of underdogs and anti-heroes, I can see some appeal there. Personally though, his attitude was just too much to take, and there were certain juvenile, repulsive things he did (like spying on the girls while they were showering, for example—ugh) that I just couldn’t look past. In spite of his evolving character arc and the major changes he goes through, he just never grew on me, which was a shame. Still, that was probably the only damper on my experience. You’d think not being able to connect with the main character would be a pretty big issue, but in fact it was only a minor hiccup, for I ended up falling in love with so many of the other characters and enjoyed the refreshing diversity of the cast. The storytelling is great, and I sped through the intensely fast-paced and action-filled plot.

Almost Infamous is a quick, solid novel that does exactly what it sets out to do: to be one hell of a fun read! Highly recommended for fans of superhero fiction and comic book lovers, especially if you enjoy the gritty stylings of comics like Garth Ennis’ The Boys. I had an absolute blast with this dynamic tale of sex, drugs, and supervillainy. 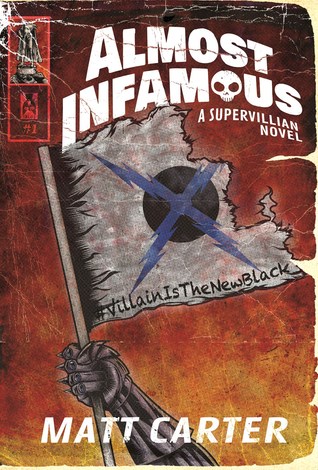