The Demonists (Demonist, #1) by Thomas E. Sniegoski
Series: Demonist #1
Published by Roc on April 5th 2016
Genres: Horror, Urban/Contemporary Fantasy
Pages: 336
Format: ARC
Source: Publisher
Thanks to Roc for providing me with a copy of this book in exchange for my honest review. This does not affect my opinion of the book or the content of my review.

Lots of interesting things are happening in the horror genre lately, as evidenced by my latest venture into Thomas E. Sniegoski’s new novel The Demonists. Imagine The Exorcist, urban fantasy style! This is also my first book by the author, and it certainly won’t be the last—not if there’s more like this coming my way.

The story follows the husband-and-wife team of John Fogg and Theodora Knight, who are the world’s foremost experts on paranormal investigation. They’re even the stars of their own show called Spirit Chasers, a reality TV series that probes into supposedly haunted locations. But on Halloween night, the show producers decide to do a special episode as a publicity stunt, filming live as John and Theo investigate an old house reported to be filled with dark energy. Things should have unfolded like any other show, but then the hosts go into the basement and everything goes terribly wrong. The whole world watches in horror as the crew are massacred live on screen. John manages to survive, but not without sustaining serious injury. And Theo…

Something much worse has happened to John’s wife, who is a powerful psychic medium in her own right. Though afterwards everyone was made to believe it was a gas explosion, what really happened at the house was the unleashing of a host of malevolent spirits which has possessed Theodora’s body and left her catatonic. John desperately searches for a way to save his wife, even traveling overseas to investigate rumors of an excavation site containing an ancient library and books which may hold the key to exorcising Theo’s demons. Meanwhile, about half a dozen children have vanished since Halloween, snatched in the middle of the night from their homes, and a determined FBI agent is doing everything she can to find the missing kids before time runs out.

Urban-fantasy-meets-horror seems to be a burgeoning trend these days, and I find myself really enjoying the recent offerings that blend paranormal and fantasy elements with the gruesome, dreadful, and nightmarish. The Demonists delivers its monstrous demons in spades, and does not spare any of the gory, grisly details. This was a book that truly creeped me out, which is a rare occurrence; in general I consider myself quite immune to the usual trappings of the horror genre and don’t tend to scare or get grossed out easily, but I think ever since I became a parent, disturbing tales involving kids will now always have this way of making me feel unsettled. Sniegoski is a skilled storytelling with a talent for creating a foreboding atmosphere and cranking up the dread.

In fact, I think the author could have taken it even further had he chose to; at just over 300 pages though, I thought this book was a little too short for the story it was trying to tell. On the one hand, the breakneck speed of the narrative ensures that there is never a dull moment, but on the other, neither the rigorous pacing nor the frequent point-of-view switches allow enough room for the horror to build. Timing is everything in this genre, and I wouldn’t have minded more of an opportunity for the terror to linger and seep under my skin. It would have given us a chance to know the characters better as well, because I don’t know if I connected to John or Theo as well as I could have, not did I feel the full strength of their marriage and bond. But then there were the characters who were written very well, like Agent Brenna Isabel whose backstory nearly broke my heart. And of course, who could forget the antagonist Barrett Winfield, who later became known as “The Teacher”? There couldn’t have been a more sadistic and twisted villain. Just wait until you see what he does to his own mother.

If the description of The Demonists sounds like something you’ll like to read though, I definitely recommend giving it a shot. But fair warning: it’s not for the faint of heart! While outwardly the book may look like an urban fantasy, it is definitely no innocuous romp through the usual paranormal milieus, so don’t expect to find lighthearted supernatural adventuring or any underlying romantic arcs in here. Still, I do love this subgenre. Even though The Demonists is not without its flaws, I found the book intriguing and entertaining. It’s a damn good start to what looks to be a promising new urban-horror series featuring a fascinating fusion of the two genres, and I look forward to more. 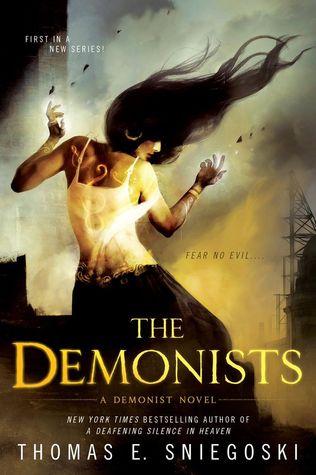