In the Labyrinth of Drakes: A Memoir by Lady Trent by Marie Brennan
Series: Memoir by Lady Trent
Published by Tor Books on April 5th 2016
Genres: Fantasy
Pages: 352
Our reviews of this author: Within the Sanctuary of Wings
Format: ARC
Source: Publisher
Thanks to Tor Books for providing me with a copy of this book in exchange for my honest review. This does not affect my opinion of the book or the content of my review.

If you’re not reading this series yet, you should be! My love for it just grows and grows, and indeed I think In the Labyrinth of Drakes may be my favorite Memoir by Lady Trent installment yet! So many questions that I had are finally answered, and there are plenty of other major reveals for readers who have been following our protagonist on her adventures. I promise you, this is one book you do not want to miss. This is an important volume that covers the events that vaulted Isabella, Lady Trent into fame, and it is a must-read.

Author Marie Brennan has written that there will be five books in all in this series, but instead of winding down at book four, Isabella’s story is simply building up even more momentum. Past installments have brought us to the inhospitable mountains of Vystrana, the sweltering jungles of Mouleen, and upon the high seas to the tropical islands of Keonga. Naturally, In the Labyrinth of Drakes is another opportunity to visit another all new biome on the quest for more dragons and more science! This time, Isabella is heading into the scorching deserts of Akhia, hoping to study the golden drakes that live there.

But as usual, the situation is a lot more complicated. Isabella has long been snubbed by the scientific community because of her sex, and her much coveted post to Akhia with her colleague Tom Wilker was only secured after a hard won battle with the Royal Scirling Army, their new employers. Tensions have been fomenting between Scirland and Yelang for the last few years, with both nations racing to unlock the secrets of dragon breeding so they can harvest the beasts’ bones for materials to build airships and other war machines. However, large dragons do not thrive in captivity, and both breeding and egg hatching programs have failed over and over again because of the lack of knowledge in the subject. In this volume of her memoirs, Isabella recounts the research challenges that she faced during her time in Akhia, and how danger also threatened behind every corner as shadowy factions learn about her secret work and attempt to destroy her.

My fascination with this series continues unabated because reading every page is a reminder of my love for the natural sciences and why I went on to study Biology and Anthropology. As a girl, one of my biggest heroes was Jane Goodall, and her decades of research and fieldwork with the chimpanzees in the wild have been a major inspiration. While Memoir by Lady Trent takes place in another time and in a fictional world with dragons, I find that the stories in these books about Isabella’s passion for learning and discovery affect me in much the same way.

For me, Isabella has also become one of the most powerful and interesting feminist icons in fantasy fiction due to her role in championing her gender in her world through addressing problems and fighting back—with knowledge! Her most effective and awesome weapon is her intelligence, along with her determination and ability to achieve more than anyone in her field so that she can no longer be ignored. The greatest obstacle comes in this latest volume, because of the nature of her assignment in Akhia. As I’ve mentioned before, the best thing about this series is that every time Isabella travels to a new location, you don’t just get the dragons—you get the entire culture of the place as well! Akhia has some very strict customs when it comes to the role of women, which Isabella has to deal with on top of her Scirling employers’ old school attitudes regarding her presence among the all-male army.

I also liked how this book threw me right into the action, not to mention the dragons get a lot more page time compared to the previous books. Early in the series, “Not enough dragons!” was a common complaint I saw, but it’s definitely not an issue here. The question of breeding the desert drakes is the central problem in this novel, but there’s also the mystery and threat behind who is sabotaging the dragon research. The antagonist also comes in the form of nature, which is a recurring theme in this series. The merciless desert setting comes to life in this one; Brennan describes this forbidding environment in such exquisite detail, you can practically feel the sand in your underwear or your skin blistering beneath the sun’s dry heat. There’s one particular scene with a sandstorm that left me open-mouthed in awe and terror.

And of course, I would be remiss if I didn’t mention the romance. Suhail is back! I wanted to pump my fists in the air but ended up refraining, if nothing else because that would mean dropping the book and interrupting my reading. However, Suhail’s return does mean you cannot tackle this book on its own without having read The Voyage of the Basilisk (I would recommend starting from the beginning of the series anyway), since his relationship with Isabella would feel way too sudden if you weren’t familiar with everything they experienced together in the previous book. Their romance actually went further than I thought it would, but it was also a very welcome development. I so enjoy the chemistry between them, but don’t expect anything in Isabella’s love life to follow conventions! Remember, this is the woman who was initially attracted to her first husband because of his impressive library, so you can imagine the courtship between her and Suhail would be based on love but also much, much more! But you’ll just have to read to find out…

I think I’ve gushed enough about this book for now, but trust me when I say I could go on and on. I just love this series! Marie Brennan gives Isabella a voice that is so fresh and authentic that this is one of the few fantasy series that truly makes me feel like I am transported to another world. I highly, highly recommended these books; it is an experience like no other.

Tags: In the Labyrinth of Drakes, Marie Brennan 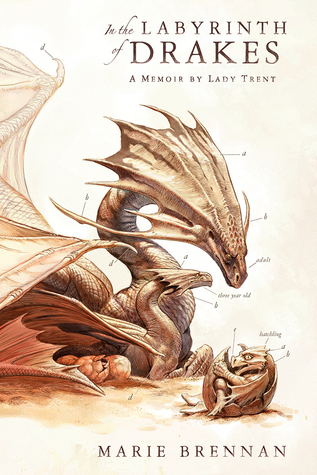