Arena by Holly Jennings
Published by Ace on April 5th 2016
Genres: Science Fiction
Pages: 336
Our reviews of this author: Gauntlet
Format: eARC
Source: Publisher
Thanks to Ace for providing me with a copy of this book in exchange for my honest review. This does not affect my opinion of the book or the content of my review.

Arena was not the story I was expecting; it was a little less video games and little more love than I would have preferred, but it also had a several things I was impressed by. In the story, Holly Jennings dives into the troubles females face daily, the pressures that athletes of all sexes deal with in their sports, the prejudices that minorities encounter their whole life, and the use and battle with drug addiction to overcome all these issue in life and more.

Kali Ling, know as “The Warrior”, is one of the top RAGE tournament players in the world. Being both a female pro-gamer, and of part-Asian descent, has made her path not an easy one, but now that she is in the pros, life is not any easier. Forced to pose for adds in gaming magazines that highlight her female and Asian qualities, and being forced to go out at night to clubs by her team’s manager, are things that are now frequent for Kali. The escape she needs, and craves, to get away from this life, is the virtual gaming world – RAGE. It is in virtual reality that things feel real to Kali and she feels alive; that virtual reality is the actual reality.

There is one other way gamers are able to get that feeling of the virtual reality: a drug called “HP”. After a crushing loss in the first round of the RAGE Tournament, the team is ordered out to the clubs. There, Kali’s teammate, Nathan, takes some HP, and then continues at home where he dies due to an overdose. This causes Kai to fall into an abuse of her own – her “drug” is gaming. Her gaming addiction leads to an addiction of HP. On top of her crave for feeling of the VR world, she was promoted captain (first female ever), has to deal with Rooke, the stubborn new replacement her manager has to brought in, keep at perfect public image that everything is fine with the team, keep a cover up of how Nathan actually died, and somehow, manage to train harder and win every match to the RAGE Tournament finals, where they will face InvictUS again.

The opening scene of this story was probably my favorite in the entire novel. It starts off with Kali in the arena. She is describing to us the environment of the arena, how it looks and how it feels to her, and then we are with her thoughts as she prepares for a battle, during the battle, and the aftermath. May not sound like anything special, but it was. The story is told from Kali’s first-person perspective, and when Kali is telling us how she feels with the virtual wind blowing in her face, you feel it too; when Kali is telling us her plan of attack, the nerves and anxiety and excitement of the enemy coming, you feel it too; when Kali slew her opponent and heard the crowd cheer, I felt like I was a champion warrior.

Holly Jenning’s prose was not fancy or verbose; it was simple, direct, and I found them to be very eloquent. The fact that I was able to sympathize with Kali immediately in the story is a testament to her writing skills, and being able to form that bond with Kali, is crucial to the story.

For some readers, after this opening scene is where the enjoyment may split. It is at this point that I started to realize the novel isn’t so much about video games, as video games are used as a platform to explore some serious issue.

While Kali is pro gamer, the actually playing of the video games is only a small part, and some may argue, the easiest part of her life. Her team’s manager, Clarence, literally runs and owns her and her teammate’s lives. He really does. It says so in the contract. If he wants them to go out to the club after a match until midnight, to show good face and get good publicity, they will; if he wants them to do a photo shoot, all of them wearing provocative clothing to sell magazines and get sponsors, they will; if he wants them all to pretend that their teammate Nathan died of natural causes and not a drug-overdose, they will… or they will be kicked off the team and lose all their money and any shot of continuing their pro career.

Another area Kali has to face and overcome is her gender and nationality. She is a women, and she is half Asian – and you know what they say: sex sells. Kali is not a fan of this, and feels used being dressed up in revealing Asian styled clothing, and being asked how hard it must be to be a”female” gamer – but she can’t say anything. If she does, Clarence will terminate her contract and she will never be able to reveal the truth to the people about Nathan’s death.

The most serious issue this story deals with is drug abuse.

When people talk about video games, they always talk about the escape that video games provide; the escape from reality into some sort of fantasy world where they can get completely and utter lost in it, and forget the troubles of the real world. Kali is gamer, and one who uses gamers to escape reality. But what if you leave reality to play a virtual reality game; a world where the colors are more bright, sounds are more clear, and textures feel more detailed; a world where everything feel more real than reality; a virtual reality where you are essentially invincible and god-like. Would you even want to leave that game? What if when you became addicted to this VR world, you would actually get drug-like withdrawal symptoms from not playing often? What if there was drug you could also take to give you that same feeling?

These themes I have addressed here are the real focus on the story. While I was looking for a video game focused novel, it focusing on the gamer’s (professional e-sport athlete) life, was an amazing surprise. Yes, they are playing video games for a living, but aside from the activity they are doing, there is no difference between the the lives of a pro-gamer and that of a pro-athlete. I was collegiate athlete and are now a natural competitive bodybuilder; I have friends and know associates, of both genders, who are professionals in both sports and others. The pressure and responsibilities that Jenning’s write about Kali having to face, mirror that of the athletes in our world today. I thought that was very impressive and added extra level to the story. Good job, Holly!

The spot where I feel some readers may be put off is with Kali’s relationship with Rooke, Nathan’s replacement. If you were to imagine a living statue, chiseled abs and square jaw, that is Rooke – he is essentially a romance cover model. At first, he is very stubborn and to himself, and seems to be defying Kali’s orders on purpose, which does not sit well with her. Kali becomes aggravated with this, and it doesn’t take a lot of reading experience to realize a romance is coming between them. The BIG shock to me about it, was how prominent this romance was and how “romantic” some of the scenes became. Not bad writing at all, I thought the writing of these love scenes were very impressive, it just wasn’t what I was expecting in what I thought was going to be a video game novel.

Despite this book being more of a love story than a video game story than I would have preferred and was expecting, I still enjoyed myself the whole time reading and highly recommend both gamers and athletes to give this a read.

E-sports are already becoming extremely popular, we have had League of Legends tournaments on ESPN, and we have VR gaming head sets releasing later this month… it makes you wonder how long it will be before Arena turns from science-fiction to a sports-fiction novel? 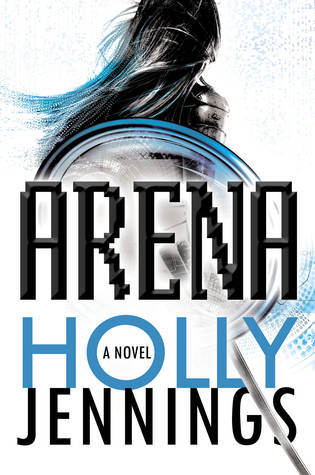