Speak by Louisa Hall is a very unusual book.  I admit that my curiosity was piqued by the cover and I wasn’t really sure what to expect when I picked it up.  As it is I found this a totally fascinating and thought provoking read.  It certainly isn’t an action book and I’ll just make that perfectly clear from the outset but in spite of the lack of any action this was a compelling read that drew me in.

This is a combination of five stories that intertwine.  I’ve heard comparisons to Cloud Atlas and whilst I can see where those comparisons are coming from this is a story that stands on it’s own two feet.  Each story is told in a certain style, so we have a diary, letters, court transcripts, a memoir and also direct communication to us through one of the characters.

The main threads are told as follows:

We follow a young woman called Mary whose family take the decision to uproot and relocate to America during the 1660s.  Mary’s tale is told in the form of a diary.  It’s a somewhat sad tale but told in a fascinating voice and a style that I really enjoyed.  I would have happily read more from Mary to be honest, I would love to have continued with her story but that’s not really the nature of the book to be honest.  Each of the tales are snippets in time that in spite of the time difference all share a connection.

We have a series of letters from Alan Turing to the mother of his best friend at school.  I think we’re probably all familiar with the story of Turing.  He was one of those characters who suffered in terms of being ‘different’ – not just in terms of his sexuality but also in terms of his awkwardness and inability to connect well with others.  In both respects he seems to have been endlessly persecuted and again I found this a very sad story to read but, again, totally captivating.

The Dettmans, Ruth and Karl.  There story seems to be told in the form of letters to each other that were never sent.  The two of them share a history of survival at the hands of the Nazis and this is what seems to have brought them together.  Karl is now a computer scientist involved in the creation of one of the earliest AI computers.  A programme that will eventually create a wedge between the two and due to their own inability to communicate finally see them separate.

Stephen Chinn is writing his memoirs from prison.  Accused of creating harmful babybots he is recalling his own tale.  Chinn also struggles to form friendships and relationships. You could be forgiven for calling him something of a nerd and he seems to have spent his early years with a lack of friends.  In fact his own social difficulties are the driving force behind an early programme that he established to help people meet and date and that proved incredibly successful.  From this it goes on to tell his story, of how he met somebody and finally started a family of his own.  Chinn is something of an obsessive character however and when he starts working on his babybots he pushes his family away.

Finally we have an exchange of online chat between Gaby (one of the victims from the babybots) and Mary3 – an AI software programme.  Basically, the babybots were created by Chinn to give his daughter a friend.  Lifelike robots that become addictive to the children they are given to and that cause severe trauma and withdrawal to them when removed.  Gaby has experienced an almost complete breakdown, she is no longer able to speak or move and has in fact completely withdrawn from the world around her as she experiences such overwhelming sadness over the withdrawal of her friend Eva.

The main focus of each of these tales is communication.  And there is a thread that they all share.  I won’t elaborate on that here as I think that part of my enjoyment of the story was learning how they were all connected.  Suffice to say that through communication and the development of AI programmes all their stories eventually touch.

I really enjoyed this.  It’s fairly light on sci fi – to me it’s more of a look at the way people communicate, the difficulties they have and the misunderstandings that can so easily arise and magnify.  It’s really interesting to look at the relationships from the story, both the human ones and the ones where AI were involved.

Mary loves sharing her thoughts through her diary and is actually much better at communicating through this means than actually in person when she becomes more muddled and in fact Turing seems to find it easier to relate to others through  his letters.  Ruth loves talking to the Mary AI programme created by her husband.  In fact this is when the deterioration in her own relationship first seems to occur.  Yet, when we read later chapters we can see this is actually a misunderstanding on both Karl and Mary’s part and it is in fact their own inability to communicate with each other that makes their relationship suffer.  Chinn.  Well, Chinn has always been a little awkward around others – until he made the acquaintance of his wife and for a short spell enjoyed having his own family unit.  He also has difficulties communicating – he thinks things but forgets to express them to others!  In fact the relationship between Mary3 and Gaby is the most effective as Mary3 actually manages to ‘speak’ to Gaby and persuade her to once again experience life.

I found this very thought provoking in fact I’m still thinking about all the different ramifications as I write this review.  As I said at the start, this is not an ‘all guns blazing’ type of novel.  It’s an exploration into communication and a look at artificial intelligence.  It certainly gives you pause for thought at the way our communication has and still is changing.

I really enjoyed this, in fact much more than I expected to.  It’s only a fairly short read and I found myself gripped by the individual stories and the way they all came together. 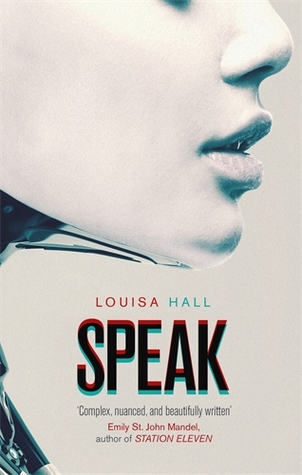