Burning Midnight by Will McIntosh
Published by Delacorte Press on February 2nd 2016
Genres: Science Fiction
Pages: 320
Thanks to Delacorte Press for providing me with a copy of this book in exchange for my honest review. This does not affect my opinion of the book or the content of my review.

I’ve heard so many wonderful things about Will McIntosh’s adult novels (Love Minus Eighty and Defenders) but this is the first book of his I’ve read. In his YA debut, McIntosh has come up with a truly awesome idea and built an exciting and engaging story around it, with well-drawn and sympathetic characters. Much of the story revolves around the mystery of the marble-sized spheres that suddenly appeared all over the world, hidden in nooks and crannies, and when the author finally reveals their purpose, well, get ready to have your mind blown! I think the word “outrageous” would not be out-of-place when describing this story, and I mean outrageous in the best possible way.

The story takes place five years after the spheres appeared, and in that time a booming economy has grown around them. Different colored spheres will give the lucky owner special abilities when they “burn” two of the same color by holding them up to their temples. For example, Rose gives you the ability to hold your breath, while Lemon Yellow will make you grow an inch. There are literally dozens of colors and special abilities, and you can either find spheres “in the wild” (spheres that haven’t yet been discovered) or purchase them for ridiculous prices from dealers and on Ebay.

Sully runs a booth at the local flea market buying and selling spheres, and even though he’s made a name for himself with the local dealers, what he’s really famous for is being cheated out of millions of dollars by billionaire Alex Holliday after finding a Cherry Red. When a girl name Hunter comes to his booth one day and proposes that they work together and split the profits, Sully agrees (and it doesn’t hurt that he’s attracted to her). But one thing they never expected to find was a new color, and that’s exactly what happens when Hunter unearths a Gold in a rooftop water tower. Their incredible find sets off a chain of events that could make them rich—or change the world forever.

I have to say that the “treasure hunt” story is one I don’t run into too often, and I thoroughly enjoyed the suspense and excitement as the characters maniacally search for the colored spheres. And of course, when they find one it’s even more thrilling! I simply loved this idea, and although some of the world-building elements were hard to swallow, and as an adult reader I had so many questions about the nature of the spheres, this story is perfect for anyone with a sense of adventure. This book has a page-turnability of eleven, and I gobbled it up in only two days (which is saying something, because I’m not a very fast reader!). The first half of the book does a great job of introducing the characters and the world of the colored spheres, but the real action begins when Sully and Hunter discover the Gold, and from that point on Burning Midnight reads like a runaway roller-coaster. My only complaint about the pacing of the story is near the end when it feels like McIntosh is trying to pack too much into his tale, and some of the time jumps were a bit on the awkward side. But by that point most readers will be too engrossed in the action to worry about things like that. You’ll simply want to keep reading to find out what the hell is going on!

The story involves three main characters—Sully, whose life revolves around the spheres (OK, I guess everyone’s life revolves around the spheres!), and who desperately wants to make a big sale so that he and his mom can stop worrying about where their next rent payment is coming from; Hunter, a canny but distrustful girl who’s been homeless her whole life and fights for every dollar she makes hunting spheres; and the evil Alex Holliday, a ruthless and slimy man who has built up his sphere empire by cheating and preying on the weak. McIntosh did all the right things with his characters: I loved the heroes and hated the villain. And his side characters are extremely well-developed, in particular Sully’s friend Mandy, who is the voice of reason in the story (I mean, what are the spheres really here for??). Mandy is an “organic,” someone who never has and never will burn spheres herself.

I mentioned before that some of the world-building was a little on the sketchy side. For example, who was the first person to discover what the spheres do? It seems odd that someone would have randomly stumbled upon that detail. And yet, without it, this story wouldn’t exist. Asking questions like these generally happens when I read a book for younger readers, which leads me to my other issue with Burning Midnight, which is that this book felt much more middle grade to me than young adult. Despite the characters’ ages—most of the teens are around seventeen—everything felt too squeaky clean, and I was never really worried about anything bad happening. Even when the purpose of the spheres is revealed, and the book suddenly turns on a dime and becomes more of a horror story, it never felt as if the characters were in any danger. Some violent stuff happens at the end, but it was almost comically violent, which is one reason I’m using the middle grade comparison. You can definitely hand this over to a ten or eleven-year-old and they’d enjoy it just fine.

And the big reveal? Well, you won’t get any more about that in this review. All I can say is Will McIntosh has the best imagination ever! Unpredictable endings are few and far between, and so I revel in each one I come across.

I guess in the end I have to say Burning Midnight is a book for anyone, no matter what your age, who enjoys adventure, treasure hunts, intrigue, evil corporations, true friendships and especially crazy story-lines. I simply cannot wait to read more from this author!

This review originally appeared on Books, Bones and Buffy. 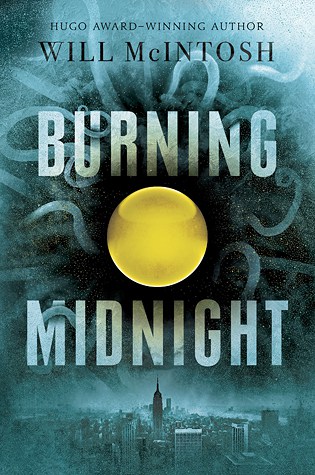