The Brimstone Deception (SPI Files, #3) by Lisa Shearin
Series: SPI Files #3
Published by Ace on January 26th 2016
Genres: Urban/Contemporary Fantasy
Pages: 304
Format: ARC
Source: Publisher
Thanks to Ace for providing me with a copy of this book in exchange for my honest review. This does not affect my opinion of the book or the content of my review.

The Brimstone Deception is the third installment of Lisa Shearin’s paranormal urban fantasy series SPI Files. For a while I’ve been comparing these books to a jauntier version of the X-Files when it suddenly hit me–the relationship between the main characters reminds me more of Brennan and Booth from Bones, except in this series Makenna is the cheerful half of the partnership while Ian is the down-to-business one. Either way, I love the fact our heroine is a Seer, one of just a handful of people in the world able to see through the glamor of supernatural creatures, and in a city like New York AKA Supernatural Central, Mac’s unique talent comes in high demand, meaning she gets pulled in on all kinds of interesting missions.

This time, SPI is investigating a new type of designer drug that has hit the streets, a serious but nonetheless seemingly non-supernatural crime, except for one major problem—called “brimstone”, the drug itself may have supernatural origins. Like its name implies, its key ingredient is discovered to be a substance only found in Hell, and its effects are equally disturbing. Humans who take a hit of brimstone essentially gain Seer abilities while they are under its influence, but lucky for Mac this doesn’t mean she is out of a job, since brimstone users are typically 1) freaked out of their minds when all of a sudden they start seeing werewolves, vampires, and other monsters crawling all over the city, and 2) they can’t remember a thing after the high wears off. Thank goodness.

Unfortunately, this doesn’t mean brimstone isn’t causing all kinds of other complications for SPI. A string of gruesome deaths coinciding with the sudden emergence of this drug have them convinced that it is all related. The victims are drug dealers and other criminal underworld types, meaning someone or something might be clearing out the competition in preparation for their next move. What that might be is anyone’s guess, but with all evidence pointing to SPI’s hidden culprit having an all-access portal to the magic from Hell, things definitely can’t be good.

As with most urban fantasy series, the second or third books is where we often see a shift in direction, and I am getting that feeling from the SPI Files now. In the first book The Grendel Affair we had a group of Grendel monsters threatening to wreak havoc in New York on New Year’s Eve, while in its sequel The Dragon Conspiracy we had Gorgons making trouble for everyone on Halloween. Clearly, I’ve been spoiled by the previous novels, because I admit I came into this one expecting another unique type of monster villain. While that didn’t really turn out to be the case, it’s also good to see SPI evolving from literal monster-of-the-week plots to wider, more series-encompassing story arcs. For instance, Mac gets a special boost to her powers in The Brimstone Deception which allows her to see dimensional rifts, and this was a direct result of the events from the last novel.

Speaking of Mac, I’m also glad that she got a more active role in this book. She disappointed me in The Dragon Conspiracy, where she was more observer than actual player, and it had struck me as strange that the main character and narrator would have so little to do with the outcome of the story. Mac was a much more important presence in The Brimstone Deception, so that was great, though now I have to wonder if we’ve gone a little too far in the other direction. Our protagonist is starting to give me “special snowflake” vibes, being the darling of the entire SPI office. And now having the ultra-rare ability to see portals too, she has caught the interest of every supernatural in the country including the wealthy and ridiculously good-looking goblin sorcerer Rake Danescu, who now finds her even more irresistible. This aspect of Mac’s character still feels like it needs balance, but I admit it is an improvement over her passivity from the last book.

Ultimately, avid fans of urban fantasy might not find anything too new in the SPI Files, though you’ll certainly dig the earlier books if you enjoy seeing unique or underused monsters in action. It’s also perfect for readers looking for a lighter tone to their UF, since Mac’s bubbly personality and her conversations with her co-workers go a long way in brightening up the darker moments, especially when SPI is called to deal with some of the more violent and brutal aspects of the supernatural underworld. It’s good, fluffy entertainment and I’m still having a fun with this series. Recommended if you need a quick escape from the stresses of life, or if you need a break from your heavier reads. 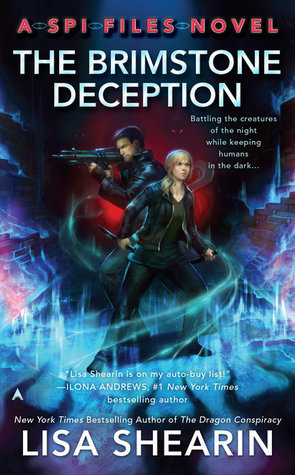