The Guns of Ivrea by Clifford Beal
Published by Solaris on February 9th 2016
Pages: 400
Thanks to Solaris for providing me with a copy of this book in exchange for my honest review. This does not affect my opinion of the book or the content of my review.

The Guns of Ivrea was a very entertaining swashbuckling adventure that contained a number of genuinely unexpected surprises.

The main story is primarily one of treachery and deceit which I would say follows three main strands.

Captain Danamis enjoys the status of pirate princeling and King’s Admiral with stewardship of the port at Palestro. Years ago a unique deal was struck with the pirates and the, then, new King, Sempronius II.  This is a deal whereby the pirates patrol the seas keeping other threats at bay.  This is an unusual alliance that ensures the King’s waters remain relatively safe whilst at the same time providing the pirates with, not only a modest income, but also the means of making more attractive and lucrative alliances with other parties on the side.  Danamis rather fell into this role when his father went missing at sea and unfortunately he’s not always the most sharply minded, usually paying more attention to his attire and his courtesans than whether conspiracies are brewing.  At the start of the story he is double crossed by a long standing friend and loses almost everything.

At the same time we make the acquaintance of Acquel Galenus, one of the monks serving at the Great Temple at Livorna.  Acquel is a grey robe, not yet initiated into the order and at the start of the story he makes a most unwelcome discovery that threatens to shake the foundations of the religion he serves.  Acquel has not always kept to the straight and narrow and his earlier years of pickpocketing led to an ultimatum of serve the cloth or become acquainted with a small barred cell.  Now on the run from his own Order Acquel needs to rely on his wits to survive as a pair of ‘seekers’ have been engaged to discover his whereabouts and silence him.

The third strand of the tale contains the merfolk.  You may have picked up from the lovely cover that merfolk would be involved in this tale.  For a number of years they have had an alliance with Danamis.  Unfortunately this alliance is about to be shattered and would remain broken except for the intervention of Citala, daughter of the Mer chieftain.  Citala has a vision for her people to regain the status and equality that they once enjoyed with humans.

Put bluntly, there’s no shortage of plot or action.  We have a religious system that is about to be set in turmoil, a pirate who has lost everything and seeks not only to be reinstated but also to have his revenge, and finally the mer folk who have for many years been reviled in accordance with the faith of the land.  These three strands will eventually come together and provide us with battle scenes fought out on the open seas, descriptions of dolphin drawn sea chariots, mercenaries with flashing swords and swaggering pirates.

The setting is Valdur, split into five duchies with three free cities and Perusia, the royal enclave and home to the King.  Valdur is anything but a stable system and those who let down their guard or become complacent are quite likely to find themselves face down in the gutter with a piece of steel sticking out of their back.  The country is held in the grip of a religious fervour and deep seated prejudices run rife – particularly towards the merfolk who have long since abandoned their close proximity to humans and now shy away from view.

The other characters who lead quite strong supporting roles are Captain Strykar who leads a band of mercenaries called the Black Rose.  Based in Maresto they have long since had a profitable alliance with Danamis and are about to be sucked into his downfall.  A pair of beautiful and yet coldly sinister sisters who will seek to not only discover the whereabouts of Acquel but have their own agenda and Timandra, a young widow who will become entwined in the young priest’s quest.  Strangely, I would say that Strykar and probably Citala are my favourite characters at this point.  Danamis, I’m waiting for him to develop a little more, I have to admit I enjoyed all his swaggering about and his unabashed enjoyment of dramatic clothing but he feels like he needs just something a little bit more to make him into a really show stopping leading man.

I enjoyed the writing with this one, it’s quite descriptive and Beal takes his time to set the scene – which might not be for everyone but I quite like detail so it suited me just fine.  The nautical terms are splashed around quite liberally which I have to admit I got a kick out of and the fantasy elements of the book were quite inventive.  I wouldn’t say the writing was gritty or dark but there’s no shortage of action and it’s quite busy in terms of characters – it has much more of a fantasy adventure feel to it with the underlying religious aspect playing a strong part.  There were a couple of different scenes where unusual woodland critters stumbled into the adventure – and they were most unexpected.   Who knew there would be a Manticore, okay, only a brief appearance but what an unusual scene!

In terms of criticisms. Well, I enjoyed this and thought it was fairly punchy but I would say it lacked that spark of humour that is sometimes such a relief in the middle of all the clashing swords.  And, I wouldn’t say this was a short read but that’s not really a surprise given everything that’s packed in here.  I did feel that there was a good deal of scooting across the seas in one direction to then scoot off in another fairly quickly after but in fairness the author breaks this up quite successfully by jumping between the different storylines otherwise I think that could have become quite tiresome.  Also, regarding the conclusion, I had mixed feelings, I was a little bit disappointed about the death of one of the characters although clearly I’m not going to reveal who that was.  I suppose I just wanted or expected more from that character and the death felt not only quickly dealt but quickly forgotten.  It just gave that particular character a ‘tacked on’ feel somehow.

Only a few minor quibbles really and the final scene ends on quite a dramatic note that leaves me eager to get my hands on the next instalment!

I had a good time with this story, I wouldn’t say it breaks the mould in particular and I admit that I was predisposed to like it when I set off on my reading adventure, but it didn’t disappoint.  It was a swashbuckling adventure, filled with derring do, merfolk and other unusual creatures of fantasy.  It held my attention, it gave me a few surprises along the way and it ended on a good note in terms of the next instalment. 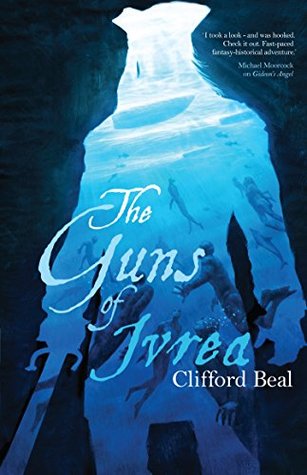