All the Birds in the Sky by Charlie Jane Anders
Published by Tor Books on January 26 2016
Genres: Fantasy
Pages: 320
Format: ARC
Source: Publisher
Thanks to Tor Books for providing me with a copy of this book in exchange for my honest review. This does not affect my opinion of the book or the content of my review.

Sometimes all your expectations go flying out the window when you actually sit down to read a book, and my experience with All the Birds in the Sky was just like that. This book isn’t so much about plot as it is about the relationships between the characters and how that relationship is constantly changing. I’m not sure everyone will love this book as much as I did, because it’s different from every other SFF book out there, and “different” is often misunderstood. But Anders’ fascinating ideas and lovable characters have earned her a place on my “must read” list. This is also a thoughtful story that explores themes such as preserving life on Earth no matter what the cost, nature versus technology, and the delicate balance of friendship. Throw in the fact that this was just so much fun to read, and I came to care about Patricia and Laurence so much that I was fully invested in how things would turn out for them.

Patricia and Laurence meet in middle school, a bad time for both of them, as they are bullied terribly by their peers. They also have less than ideal home lives, but in different ways. Patricia’s parents are strict and punish her for the slightest offense, but it’s Patricia’s sister Roberta who is her biggest tormentor. When Patricia tells her parents that she can understand and speak to animals, they lock her in her bedroom and feed her only enough to keep her alive. Patricia’s greatest wish is to leave home and study to be a witch after she has a magical encounter in the forest, and she eventually manages to do just that.

Laurence is the epitome of a geek, ridiculously gifted in math and science and misunderstood in every way possible. He’s constructed a “two second time machine,” which can send him forward two seconds into the future, just enough to avoid pummeling by the worst bullies at school. His parents are even worse than Patricia’s, if you can believe it. They hate that he spends so much time on the computer, and so they force him to participate in dangerous outdoor activities, which he hates. When they throw him in military school for an unjustified offense, Laurence finally decides enough is enough.

The beginnings of their friendship—if you can even call it that—are rocky, but over the years they manage to run into each other over and over, as if fate were trying to keep them together, and as time goes by, they grow closer and closer. Laurence eventually becomes a brilliant scientist and is hired to work on a top-secret project that could save the human race, while Patricia, who has graduated from her witch school, now performs healing spells on unsuspecting people. Both are doing their best to help humankind, but something sinister is brewing just below the surface.

One of my favorite things about this book is the way Patricia and Laurence interact, and those interactions are never what you expect. They don’t like each other very much in middle school, although they are drawn together because they are both outsiders. The story skips ahead ten years, and the two meet again as adults, each pursuing separate careers. This is when their relationship really starts to change and grow. Even though they are both on very different paths—Laurence is using science to make the world a better place, while Patricia wields magic—once again, their “Labyrinthine history” brings them closer together. But their relationship is far from smooth, and in addition to the enjoyable times they spend together, and the many philosophical discussions they have, misunderstandings and even betrays eventually drive them apart.

They do, however, share a nemesis, a sinister man named Mr. Rose who disguises himself as a guidance counselor during their middle school days. He’s convinced that Laurence and Patricia are the key to the end of the world, and he does everything in his power to stop them from fulfilling their destiny. I loved the creepy quality he brings to the story, and you’re never sure if he’s actually trying to protect the world against Laurence and Patricia, or whether he has an ulterior motive.

Anders brings so many cool ideas to this story, and if there’s one thing you can say about All the Birds in the Sky, it’s that it’s completely unpredictable. Each new idea is better than the last, and by then end of the story I found myself wanting to live in this world! For example, when Laurence first meets Patricia, he’s building an AI computer in his bedroom closet, which he’s teaching to be sentient. I loved this AI to pieces, especially because Patricia plays a big part in its development.

Anders also introduces us to the “Caddy,” an iPod-like tablet that is as ubiquitous as the smart phone is in our world. Caddies do lots of things, but their main purpose is to make your life better, by steering you towards opportunities like meeting the right people, catching a bus before the rain starts, or helping you avoid potential accidents. The author is clearly poking fun at our obsession with phones and tablets, and I loved how when Patricia decides to stop using hers, her life takes a turn for the worse.

Anders’ prose seems simple and straightforward, but put all those simple and straightforward sentences together and you have a wonderfully quirky style that reminded me a lot of Kelly Link’s. In a mere three hundred or so pages, Anders packs her story full of five hundred pages worth of ideas and character development, and while some readers may think all these different elements are nothing more than a jumble of disparate ideas, Anders manages to get everything under control by the end of the story. Odd and unexpected, wondrous and strange, All the Birds in the Sky is an epic story of two people who may or may not have been destined to meet.

Tags: All the Birds in the Sky, Charlie Jane Anders, Tor Books 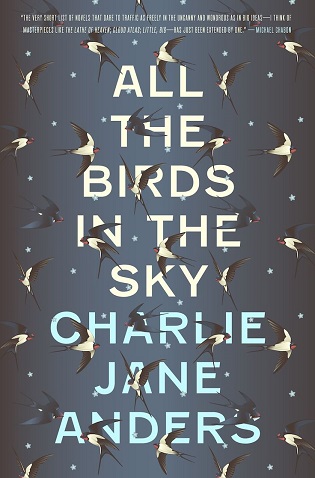