Medusa's Web by Tim Powers
Published by William Morrow on January 19th 2016
Genres: Fantasy, Horror
Pages: 368
Our reviews of this author: Down and Out in Purgatory
Format: eARC
Source: Publisher
Thanks to William Morrow for providing me with a copy of this book in exchange for my honest review. This does not affect my opinion of the book or the content of my review.

Medusa’s Web is my first Tim Power’s book but given that he seems to have the ability to combine great writing with fantastic imagination I don’t think it will be my last. I really enjoyed  Medusa’s Web. It has a wonderfully gothic horror feel to it and the writing style helps to lend it the feeling of an older book which is an aspect that I really enjoyed.

The story gets off to a great start with an almost movie feel to it. Picture this. Two people arrive at a decaying mansion in the Hollywood Hills while the storm clouds gather overhead. Up in the mansion, two cousins watch their approach. Only days ago the head of the family, Aunt Amity, committed suicide in the most unlikely fashion by climbing to the top of the building and detonating a hand grenade. The four are about to spend a week together as part of Amily’s wishes before her last will is revealed. It’s all a little sinister feeling. The house, dressed up in old Hollywood movie props is a strange place, dilapidated, falling apart, doors that lead to nowhere and it seems to be slowly sinking into it’s foundations. It put me in mind of the House of Usher and indeed a number of references were made to that story.

This is a difficult book to review in terms of giving away spoilers I think. It has such strange and fantastical elements to it that are so unique that I really don’t want to let the cat out of the bag. What I can tell you is that the inhabitants of Caveat have all had different levels of exposure to something referred to here as ‘spiders’. Spiders are abstract images, eight limbed that when viewed cause a sort of temporal dislocation for the viewer who experiences either forward or backward jumps in time where they then experience things through the eyes of somebody else. These are only brief moments of course but some of the experiences can be dangerous and abusing the images can lead to a warped sense of reality as well as a deterioration in health. Indeed the Caveat estate it self appears to have become a place where time has become fractured and images from the past seep into the everyday. The whole concept of the spiders is fascinating and compelling to read about. Based on a strange combination of ancient mythology and the occult the use of spiders is something that has drawn the attention of ‘others’ and not necessarily in a good way!

To the characters. Claimayne and Ariel are cousins, Claimayne was Amity’s son, and the two, having lived their lives under her roof clearly have expectations about her legacy. However, a last minute change seems to have drawn Scott and Madeline back into the picture. Claimayne comes across as the more affable of the two cousins initially, certainly he seems to welcome Scott and Madeline a little more happily into his home than Ariel does who seems to hold a degree of bitterness towards the two. The reasons for that will eventually unfold, in fact the family dynamics make for compelling reading. Madeline and Scott – well, they don’t seem to have had the happiest existence. They had a nasty experience when they were both younger and this seems to have mentally scarred them, Madeline more than Scott. Madeline comes across as quite fragile and almost breakable and returning to Caveat doesn’t seem to suit her as she seems to be losing control. On top of that their parents disappeared when they were both fairly young which is how they came to be in the care of their aunt. This book also has the inclusion of real historical figures with Rudolph Valentino and Natacha Rambova making surprise appearances.

In terms of the writing I think Powers has a very persuasive style. I had absolutely no idea where the story was going to go to be honest but I was enjoying the writing so much that frankly I was in it for the whole ride anyway. And I’m not too precious to admit that I had a few moments where I wasn’t totally sure that I knew what was going on. In one respect there is a mystery to solve and the writing style, setting and even the characters – not to mention the fairly brief mentions or inclusion of new technology all add up to a story that feels slightly older than it actually is. We also have this surreal jumping back into 1920s Hollywood with all it’s glamour and on top of that there’s a creepy type horror feel that seeps into the story, although let me be clear, I’m not talking blood and guts horror here but something more subtle.

I really liked this. I didn’t know what to expect when I picked it up; I didn’t always understand what was happening, I certainly couldn’t have second guessed the ending and throughout it did have a little bit of a feeling like being led by the nose.  Powers certainly has the ability to suck you into this world, no matter how strange, and to make it feel almost plausible!  He starts off fairly slowly but then really turns up the tension dial as the stakes change. 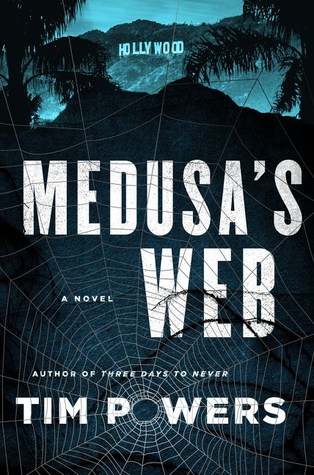