Night Study by Maria V. Snyder
Series: Soulfinders #2
Published by Mira on January 26th 2016
Pages: 448
Our reviews of this author: Dawn Study
Thanks to Mira for providing me with a copy of this book in exchange for my honest review. This does not affect my opinion of the book or the content of my review.

Night Study is the 5th book in the Study series.  It continues right were Night Study left off, after Yelena’s big reveal to Valek  View Spoiler »that she believes she is pregnant. « Hide Spoiler.  Yelena continues to deal with her loss of magic. This has a huge impact on her, as you can imagine and she realizes just how dependent on it she has been. Tensions between Ixia and Sitia are growing worse, and war seems to be imminent. The Commander is, well, not quite himself and Valek seems to have mysteriously lost his trust.

I will admit, I do not read a lot of books labeled Young Adult, so I may be off base on some of my assumptions. One thing I do feel is unique about this series (at least from my experience with YA), is that the last two books in the series take place after a good amount of time has passed from the first three. What that means is that the main characters have aged and are more “adults” than they are “young adults”. I believe they are in their late 20s, Valek may actually be in his thirties. But, the overall tone of the book and content is very much in line with what I expect from YA.  So, despite the protagonists being older than you typically find with books in the YA market, I don’t see any reason for YA readers to be disappointed with this one. There is a strong romance element, but sexy times are more eluded to rather than take up page space (in other words, it is “clean”).

I think my favorite part of this book was really learning a lot more about Valek. We discover so much about his past and family and his immunity to magic. I think this really helped to flesh his character out more than it has been in the past. It helps us understand him more and empathize with him. And this is important as Valek is definitely tried and tested in this book and he can use all the support from us he can get. His loyalties to the commander and Yelena are both tested and he is forced to make some very hard decisions. I appreciated having a better understanding of the man behind the assassin for this.

Now, come to my complaints about the book. I always liked Valek. He was dark and mysterious. Dangerous. But Yelena was able to find redeeming qualities in him, and so could we. It’s that bad boy attraction, that danger and edge that gives him a bit of an extra appeal. In this book though, I have to say I did not find him as dark and dangerous or mysterious. I suppose that makes sense as we have gotten to know a lot more about him. But, I did feel he could be more relatable, less dangerous without being over the top gushy-mushy. Yeah, that’s my technical term of choice for how Valek behaves in this book. I had a number of serious eye rolling moments in relation to Valek’s responses to situations. There were scenes where I felt his character lost his edge and became a total sap. Maybe I’m being harsh, but there’s no denying that his character just did not consistently work for me in this book. I don’t want to roll my eyes at the sentimentality a character whose very name is supposed to instill fear in people. Can he have some softer moments? Yes, of course, but something about how these scenes were presented, I felt it went a little too far.

Now, in all fairness, I don’t want him to be just a scary caricature either. And he is greatly humanized in other ways during this book, we learn a lot more about his history, and I really enjoyed that. Knowing someone’s past, where they came from and how they wound up taking the course in life they did can really help us understand and relate to character. From that aspect, there was a lot of growth for the reader experience, we have much more to work with in our understanding of Valek. But that still doesn’t mean that I have to like when he acts in ways that induce eye-rolling for me.

In all fairness, my eye-rolling may have been more because of the type of book rather than anything else. This is a YA Romance novel. Honestly, I felt the romance aspect of it heavier in this book than I remember in the other books. And this may be the real root of my complaints. I felt like the romance took a front seat and everything else was just conflict getting in the way of the happy ending we all know is coming eventually. Not everyone reacts negatively to this, so there are definitely readers that will love it, I just don’t happen to be one of them.

Overall, this is not my favorite book in the series, but for fans it is worth reading on. Especially for those that are eager to read more about Valek and Yelena as a couple. 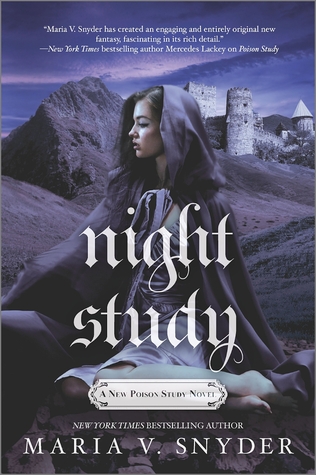