The boys are back! When I heard Michael J. Sullivan was going to take his next Hadrian and Royce adventure to Kickstarter in the summer of 2015, I happily forked over the cash to support this brilliant project by one of my favorite authors. I’ve read and loved every Riyria novel and I couldn’t have been more excited about The Death of Dulgath. As part of my backer rewards, I received an early digital copy of the book, but I later also picked up the audiobook version because of Tim Gerard Reynolds, the narrator who brings Sullivan’s wonderful characters and world to life.

I was not disappointed. The Riyria Revelations ranks high among one of my favorite fantasy series, so naturally when Sullivan went on to write two more books in The Riyria Chronicles, I read those too. Chronicles is meant to be a prequel series, comprised of stand-alone tales featuring Hadrian and Royce before the events of Revelations, and The Death of Dulgath is the third of these. As thieves for hire, our protagonists are always getting into trouble involving daring heists and other shenanigans, which is another reason why these side stories about their “time before” have always appealed to me, but in this latest novel, things take on a surprising twist.

This time, instead of being tasked to steal something, Royce and Hadrian are hired on as consultants…of a sort. In the province of Dulgath, the last surviving member of the ruling noble family is being targeted for assassination, and the authorities need Riyria’s expertise to help foil the plot. But of course, things are never as they seem. When Royce and Hadrian travel to Dulgath, they find a perfect little kingdom where everyone is healthy, crops grow aplenty, and it never rains during the day. Plus, the young Lady Dulgath whom they are meant to protect seems to know a lot more about the situation than she lets on.

For several reasons, I found The Death of Dulgath to be very different from the other Chronicles books, with the most obvious distinction being the story’s heavier emphasis on mystery. Royce and Hadrian do more investigating than anything else, and the pacing was markedly slower especially towards the beginning and the middle—though fear not, as there’s still plenty of action and adventure to go around, as well as a good number of plot twists.

But as usual, what I loved most was the character interaction. Fans of the series have always known Hadrian to be the one who wears his heart on his sleeve, while Royce is his polar opposite—ill-tempered, aloof, and untrusting. The Death of Dulgath catches our protagonists at an interesting time in their lives, set only a few years after they first met. Both are still learning how to work with the other, but slowly yet surely, trust is starting to grow. Let’s just say there’s a good reason why everyone calls this series the ultimate bromance; each story adds a little more to what we know about their relationship, which is another reason why the prequel novels are so special to readers who have followed these characters for a long time.

For this reason, I highly recommend reading all the Riyria books in publication order, starting with The Riyria Revelations series. You can then pick up any of the Chronicles books and enjoy them perfectly fine as standalones, but having read Revelations first really enhanced my experience with The Crown Tower, The Rose and the Thorn, and now The Death of Dulgath. What’s more, Michael J. Sullivan peppers this book with a lot of references to the lore and history of this wider world. While you don’t need any of it to follow the story, it’s obviously much more fun when you recognize all the allusions. Also, it lets you appreciate just how big, vivid and elaborate this series is, and believe it or not, it’s still growing all the time—next year, Sullivan’s upcoming Age of Myth will be set in the distant past of these Riyria books, going back to this world’s ancient times. In fact, he even works in a teaser or two for it in the plot of The Death of Dulgath.

No question about it, this book is another winner, bringing back everything I love about Riyria: great characters, great setting, great story. I really couldn’t have asked for more. A must-read for fans of the series, and if for some reason you haven’t been initiated into the fascinating world of Riyria yet, seriously, what are you waiting for? 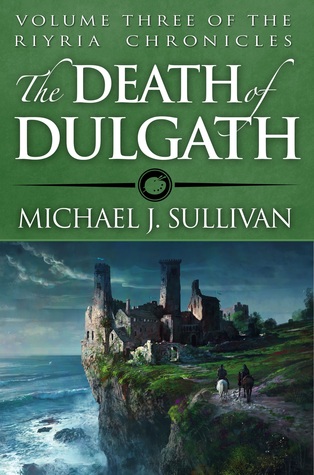