Steal the Sky Series: The Scorched Continent #1
Published by Angry Robot on January 5th 2016
Pages: 448
Thanks to Angry Robot for providing me with a copy of this book in exchange for my honest review. This does not affect my opinion of the book or the content of my review.

I’m going to be totally honest here and just come out and say that Steal the Sky was a book that I very nearly decided to skip.  I don’t know why. On the face of it this book has everything that I would normally jump at so I guess at the time I was maybe just having a ‘moment’.  I’m so glad it was a fleeting moment because I did pick up a copy (clearly) and it was a really enjoyable read.

At the start of the story we have two conmen arriving in the City of Aransa.  Honding and Tibs are about to undertake their most ambitious heist yet – they’re planing on stealing a brand new and sparkly airship, however, all their planning isn’t going to prevent this heist from going to hell in a handcart.

First things first.  A bit about the setting.  I was really impressed with the world building and the way that you find out little by little what you need to know.  In fact I thought that O’Keefe showed great ability with establishing the scene and the characters.   The world seems to be split between the green and pleasant parts and the scorched, difficult to live in parts and obviously the Empire chooses to live in the green and pleasant parts of the world whilst the dry and uninhabitable areas seem  to be where people out of favour are sent.  Well, it also seems to be where the vast majority of mining takes place.  So as well as outcasts the City of Aransa plays home to the miners and obviously the city has grown over time to include your usual slums, taverns, markets and other supporting areas.

This is a world where Selium exists.  Selium is a very strange gas, incredibly light and with powers that give those that are sel-sensitive the ability to perform certain types of magic.  Selium is found deep within the mines and is sought after as it is used to power things such as the airships.  Those who are sel-sensitive can have varying degrees of ability which range greatly. I’m not going to elaborate on that because it is expanded on in the book and I was really surprised by it all.  Mining Selium is dangerous with the threat of explosions and the only people who can sense where the Selium is are those who are sel-sensitive.  So, finding yourself with Selium abilities is something of a double edged sword as with one hand you’re gifted the ability to perform certain types of magic but on the other you become enlisted by the empire and sent to the mines.  Don’t get me wrong, the miners are looked after and provided with certain comforts but still, at the end of the day, their freedom and ability to make their own life decisions has been effectively removed.  To cut a long story short it’s akin to being a prisoner.  Those with an affinity are trapped in this life with no choice to take a different route until they are incapable of mining or are injured.  And, those with really ‘special’ abilities have a different future in store altogether – a bit of a tease but I really can’t say more on that aspect.

Now, the people.  We have Detan.  He has a lot of secrets and a reason for trying to keep low on the radar.  His trusty sidekick is Tibs.  They have a great friendship and a way of working together that makes you suspect they can almost read each others mind!  We also have a watch captain called Ripka – she’s a great character and I really liked her.  I can’t even put my finger on why, other than she’s had to work hard, she’s firm but fair and she’s just a tough, no nonsense type.  Then we have General Thratia, fondly known as the throat slitter – and with good reason! and finally Pelkaia.  Pelkaia is sel sensitive.  Most people refer to her as a doppelganger but she prefers to be known as an illusionist.  Pelkaia has her own agenda and her and Detan are going to make a strange sort of alliance.  All their fates seem to be rushing headlong on a collision course.

Now, basically, I’m trying to be a little bit coy about the plot because there are a good deal of twists and turns as the story progresses and I don’t want to give them away.  Detan and Tibs try to do their ‘thing’ but somebody throws a spanner in the works and all hell breaks loose.  Pelkaia does a bit of sneaking about and Ripka tries to get a grip on everything!  Is that all perfectly clear?  Probably not.  Long story short – you can’t trust anybody!  Nobody and nothing is what you think and it’s a good deal of fun getting it all sorted out.  This is much more than the heist story that it sets out as.  We have corruption and bigger plans being put into place by those in power and alongside this somebody in the shadows plotting vengence.

I would definitely recommend Steal the Sky.  It’s a very entertaining read.  The characters are a great combination of goodies and baddies and somewhere inbetweens.  The writing is smooth, the plot dives about like a maniac and the ending is a great set up for the next book.  I’m pleased that I didn’t miss this one. 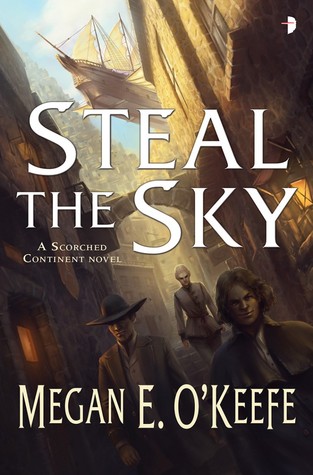