Nightwise by R.S. Belcher
Published by Tor Books on August 18 2015
Genres: Fantasy
Pages: 320
Our reviews of this author: The Brotherhood of the Wheel
Format: Finished hardcover
Source: Publisher
Thanks to Tor Books for providing me with a copy of this book in exchange for my honest review. This does not affect my opinion of the book or the content of my review.

I loved the first two books in Rod Belcher’s Golgotha series, and I was curious to see what else he could do. And boy am I glad I picked up this book! I was blown away by his fascinating magic system, not to mention the characters. Best of all, Belcher has some mad writing skills, in case you appreciate that sort of thing, which I do. While his Golgotha books contain multiple points of view, this story is told in first person from the perspective of Laytham Ballard, a powerful wizard with an attitude problem, who blazes through his friends and enemies—often killing them in the process—in order to get what he wants. Belcher definitely takes a risk with Laytham, because he is not a likeable guy at all. But the fact that he freely admits to everyone around him that he knows he’s an a-hole made him compelling, and yes, I grew to like and even sympathize with him by the end of the book.

But there is so much to love about Nightwise besides the characters—and I’ll get to them later, because there wasn’t one in the bunch that I didn’t enjoy. Belcher starts with a simple but strong hook that relentlessly propels the story forward. Laytham makes a promise to his dying friend Boj to track down and kill the wizard who killed Boj’s wife. Sounds simple, right? But of course, it’s not. Dusan Slorzack is a nasty piece of work, a Serbian war criminal who tortured and killed Mita, and now that Boj is dying of AIDS (he’s a heroin addict), he calls upon Laytham to help him seek revenge. But finding Slorzack is nearly impossible. Even with all of Laytham’s many contacts in the magical community, he seems to have completely fallen off the face of the earth.

As Laytham follows the clues that lead him closer and closer to Slorzack, he knows he’ll have to call in favors, and maybe even make a deal with the devil, to avenge his friend.

I love stories that bring the real world and the fantasy world together, and Nightwise does this amazingly well. In Belcher’s world, magic is hidden just out of view of the majority of the population, but it’s everywhere. Politicians, celebrities, and major corporations are all part of the Life (what Laytham calls magic), manipulating and controlling the economy, politics, and even history’s most tragic events (for example: 9/11). Since the story is told from Laytham’s point of view, the reader is given a front row seat for all the amazing and terrifying things that are going on right under our noses, and like most horror, it’s very hard to look away. I wasn’t surprised to find the Masons and the Knights Templar playing roles in Belcher’s world, and even Cthulhu gets a nod, suggesting that H.P. Lovecraft’s work is simply reality disguised as fiction. Very cool stuff, and I gobbled up every word.

And right in the middle of this fantastic world is Laytham Ballard, one of the most interesting characters I’ve come across in a long time. I know there are readers out there who don’t like him, based on some reviews I’ve read recently, so maybe there’s something wrong with me, LOL! But I’m telling you, this guy will grow on you. I’m not sure “obnoxious” is a strong enough word to describe him, but it’s a start. He’s a wizard with a reputation (he raised his granny from the dead when he was only ten years old), kind of like the rock star of magic. But what’s funny is that he calls himself a rock star, so obviously he doesn’t have a problem with self-esteem. Laytham is despised by many of his so-called “friends,” and he’s not afraid to use or betray them in order to get what he wants. In this case, what he wants is information—the location of Slorzack—and he won’t let anyone get in his way.

But Laytham has people in his life that love him, and that’s what sealed the deal for me. One unexpected scene in a cemetery between Laytham and his dead lover Torri Lyn could have come across as completely out-of-place, but somehow Belcher made it work.

The other characters ain’t too shabby either! I absolutely loved Ichi, another powerful wizard with Ninja skills to boot, who helps Laytham in his quest. He also gets help from a guy named Bruce, an “Acidmancer” who yes, drops acid while he’s traveling through time and space in a one-of-a-kind quantum machine.

(By this time you should be salivating to read this book!)

I also loved all the details that Belcher adds to his story, which led me to Google so many things in Nightwise. There’s a cool urban myth about how white cigarette lighters are bad luck (which of course I immediately had to Google to see if it was true! Go ahead. I’ll wait.). Laytham obsesses about a soft drink called Cheerwine, which I’ve never heard of, and I Googled that as well. He spends a large portion of the story trying to find Cheerwine, which I thought was pretty funny, and it isn’t until he travels south of New York that he is finally successful. And many, many more details, but I don’t want to spoil too much, so I’ll let you discover those for yourself.

Near the end of the story, Laytham meets a trucker named Jimmie who belongs to an occult organization called the Brotherhood of the Wheel, which I was thrilled to run across, because that’s the name of Belcher’s next book. (spin-off perhaps??) To be honest, there wasn’t anything in Nightwise that I didn’t like, although I do have an issue with the book cover, of all things. Laytham tells us early on that at one point he lost his shadow to an evil loan shark (!!), and you can clearly see his shadow on the cover art. But hey, I’m willing to forgive such a small thing.

Nightwise is a must-read for fantasy fans who are looking for something different, and who don’t mind challenging main characters. Rod Belcher is a rock star, and I can’t wait to read his next book. 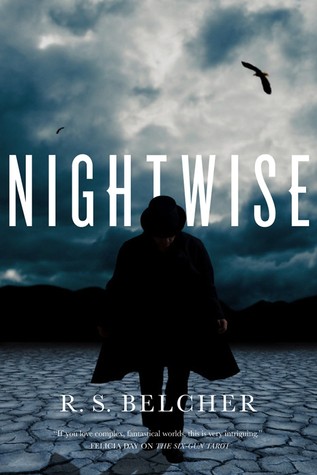