Time and Time Again by Ben Elton
Published by Thomas Dunne Books on December 22nd 2015
Pages: 400
Source: Publisher
Thanks to Thomas Dunne Books for providing me with a copy of this book in exchange for my honest review. This does not affect my opinion of the book or the content of my review.

While I enjoy time travel books as much as the next reader, I still recall my doubts when I was first pitched this book: What if I don’t know that much about World War I? How much history do I need to know in order to follow the plot? Will I still be able to enjoy this story?

Looking back at those questions now, I have to laugh. Really, I needn’t have worried about a thing. Even though history is at the center of this plot and WWI is the inciting incident that sparks the fuse, Time and Time Again turned out to be about so much more. With shades of Stephen King’s 11/22/63, this novel is a suspenseful and heartfelt adventure through time and alternate realities. In truth, it focuses more on the repercussions of changing history and what it means for the main character—as well as for the whole world and the generations after him.

In a not too distant future from now, Hugh Stanton is an ex-soldier and a washed up celebrity who has lost everything. The army wants nothing to do with him, and his once popular survival webcast had to be shut down after ratings fell. His wife and children are dead, killed in a hit-and-run accident in which they never found the culprits. With nothing left to lose, he agrees to take on an insane mission from a group of Cambridge scholars who call themselves the Order of Chronos.

If you had one chance to change history and make the world right, when and where would you go and what would you do? This was the question posed to Stanton by his old history professor Sally McClusky, the Master of Trinity College herself. For all of them, the answer was simple—June 28, 1914 in Sarajevo, to prevent the assassination of Archduke Franz Ferdinand thus removing the catalyst for World War I.

The reasoning behind their choice is both surprising and not surprising, but you’ll have to read this book for yourself to find out why. Suffice to say though, it made for a good premise. It’s no wonder that there are all sorts of “What If?” speculations surrounding this date, considering the string of extraordinary coincidences that led directly to the Archduke’s death (if you haven’t heard the story about the sandwich that changed the world, definitely look that one up!) If just one thing had changed that day, could the Great War have been averted? And how might the world look like afterwards?

And here, Ben Elton had my full attention. As I said before, I enjoy stories about time travel, and my favorite books are always those that make me see things in a whole new light. Time and Time Again definitely deserves a place in this category. I love time travel theories that pull together history and science fiction, and Elton achieves this in style, postulating that Sir Isaac Newton had found a way to travel back in time and even tied this event to the great mathematician’s nervous breakdown during the period of 1692-1693. However, the best thing about this book is all the twists and turns, especially when it comes to a couple of big revelations near the end. Obviously I can’t go into them in any detail, but what I can say is that with so many poignant and unforgettable moments, Time and Time Again is one truly special book.

Ben Elton also knows how to keep a reader’s attention. I went into this book thinking it would be similar to a historical drama, but I was surprised to find an exciting mix of mystery, suspense, and even some romance and light humor. This isn’t a story that relies on a single element or one aspect of its premise to make its point, and again, this was what made me think of King’s 11/22/63. If you enjoy multi-faceted time travel stories, Time and Time Again is worth checking out—even if you aren’t particularly well-versed in the history of World War I. I myself have never been too interested in the topic, yet I found myself unable to resist the author’s vivid descriptions of early 20th century Europe, and it was doubly interesting to experience this world through the eyes of a character as fascinating as Hugh Stanton.

But above all, I loved how this book made me think. Going back to the original question Sally McClusky posed to Hugh Stanton: If you could make one change in history to make the world better, what would it be? Perhaps our protagonist should have answered the question with another one: Would you even want to? Not that the idea itself isn’t tempting, but who makes history anyway? Can a single person really make a difference, or are we all just like particles in Brownian motion, creating history with each and every random collision? Maybe it’s naïve to believe we can change the future by altering the past, deciding who lives and who dies. Maybe it is hubris and lack of understanding that ultimately causes Stanton to make all his mistakes, leading him to his own little quandary.

In case it’s not obvious by now, I had a great time with this book. This is the first time I’ve ever read Ben Elton, and I’m very impressed with his extensive knowledge of the time period as well as the brilliant way he structured and paced this story. I thought I’d seen it all when it comes to time travel plots, and never have I been so glad to be proven wrong. Time and Time Again swept me up in its richness and intrigue, taking me to places I never expected. I know this one is going to stay with me for a long time. Definitely one of the most captivating time travel novels I’ve ever read. 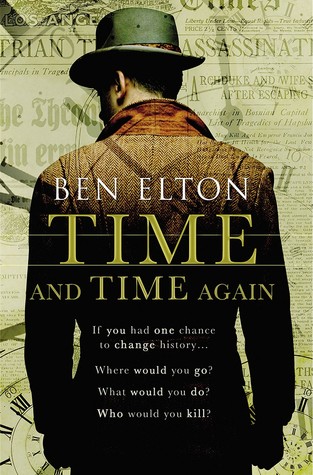