Angel of Storms by Trudi Canavan
Series: Millennium’s Rule #2
Published by Orbit on November 12th 2015
Genres: Fantasy
Pages: 512
Format: ARC
Source: Publisher
Thanks to Orbit for providing me with a copy of this book in exchange for my honest review. This does not affect my opinion of the book or the content of my review.

With Angel of Storms, the Millenium’s Rule series continues to fascinate me. While I enjoyed The Black Magician Trilogy, I will confess to never loving it. This trilogy is turning out to be a much better match for me. Perhaps this is mainly because The Black Magician trilogy is young adult, where as this one,  I believe is not. Regardless of the reason, I tend to be captivated by this series and find it incredibly fun to read. This is the second in the trilogy, and while I felt like there was a good deal of progression in this book including wonderful details about the world, there is still so much left to resolve that I actually had to verify if this was a trilogy or a longer series. And it is definitely listed as a trilogy, so I suspect that final book is going to be packed with lots of excitement!

For readers of the first book, I know many were hoping for a quick joining of Rielle’s and Tyen’s story lines in this book. For those that are new to the series, the first book, Thief’s Magic, is told through those two POVs with no apparent connection  between them. In the first book they were essentially two completely separate stories being told alternately through the book. The separate story lines were not something that bothered me at all in the first book, but for those of you that were feeling a bit impatient wanting them to come together with the last book, I hate to inform you there is not a quick joining of the two. However, from the beginning of this second book it becomes much clearer how they might relate to each other. One of my chief impressions with the first book was how I was equally excited for both POVs. I enjoyed each so much I was slightly disappointed to switch to the other, only to quickly be excited to be back with that character. I found I continue to really enjoy both of the main characters and their stories in this one. If was pushed to pick favorites, I would say I probably preferred Tyen a bit more in the first book, but Rielle a bit more in this one. But the difference is really minute.

When we rejoin Rielle, 5 years have passed since she was left with the weavers. Being the talented artist she is, she has quickly become adept at weaving, producing magic to replace that which she stole in the last book. She seems content with her quiet life. Of course, what fun would it be to read about Rielle’s quiet life as a weaver?  So, quickly her world is sent into upheaval when the Angel of Storms visits to offer her a position as an artisan in his world. That’s an offer that no matter how content Rielle has been, she just can’t refuse. However, things don’t work out for Rielle quite as she imagined and she finds herself suddenly completely alone, on her own in a foreign place with no sign of the Angel of Storms or anyone else she knows to help her. Needless to say, her life takes a sudden unexpected turn and she is left having to question many things she had previously been so sure of. Both her faith and her trust are tested. She also must make some hard decisions in this book between what is potentially best for her versus her sense of loyalty. Her character at times still feels “young” to me, but she is learning and developing.

Tyen has done well for himself. He is teaching mechanical magic and, like Rielle, seems to be happy with the life he has been leading since the last book. His world gets its own upheaval with the sudden reappearance of a powerful sorcerer called the Raen. Magical schools have been outlawed and with the closure of his school, Tyen and the other students and teachers are all fleeing. When Tyen is caught breaking a law by the Raen himself, he is put in quite a precarious situation. He is given a choice of doing something that he is not quite sure of ethically, but in doing it he will be rewarded with the opportunity to free Vella, having her restored to human form. Seeing how Tyen deals with divided loyalties as well as maintaining confidence in himself and his decisions is interesting.

The Angel of Storms is a whirlwind of a book doused with magic that shows no mercy, tests both loyalties and faith. It reveals a much clearer picture of the world, journeys to unexpected places, tests both protagonists to their limits and ends on a note that will leave you craving the next book. 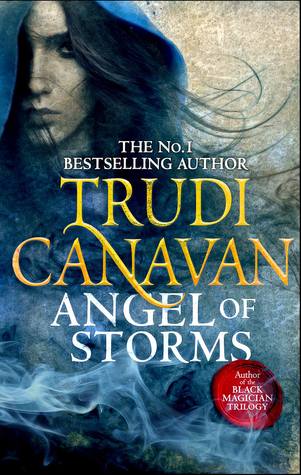