I almost didn’t write a review. I wasn’t sure if I should be reviewing something that was important enough to me that I contributed to a kickstarter for the first time.   But upon reflection I realized that was pretty silly; of course it is ok for me to review The Labyrinth of Flame. After all I am not profiting from it and in reality my contribution just amounted to a long term pre-order of the e-book. That said, consider this a disclosure for those who may think one was needed.

A quick rundown for those not in the know. The Labyrinth of Flame by Courtney Schafer is the third book of the series The Shattered Sigil. Despite getting rave reviews from everyone that matters (oops, personal bias coming through) the series was unfortunately caught in the fiasco that came from Night Shade shutting down; two books released and one short of a finished story.   For various reason Schafer decided to take the self-published route for book three.

This series has always been a buddy adventure taken to an extreme level.   It is the story of Dev and Kiran, best friends after two books who will do anything for each other, and their relationship is the thread that holds everything together. Not to get too touchy feely but damn it one has to be touched by the level of devotion their relationship has grown to. The Labyrinth of Flame succeeds because it never forgets its main story revolves around this. Passages in which the two have to go their own way are almost painful; it never seems right and even if bad things are about to happen it always feels worse when they are apart. Secondary relationships are also important; Dev has a strong and capable love interest in Cara that deserves her own series. Watching a whole group of people willing to sacrifice themselves for others; all tied to the path Dev and Kiran are on, is enough bring hope to even the bleakest setting.

And bleak this setting is. Though temporarily kept safe at the end of the last book the pair are still hunted by the most ruthless villain on page in quite some time, a bloodmage named Ruslan who wills stop at nothing to get his apprentice Kiran back in his hands. At the same time Kiran has a slight demon problem; his unknown past is catching up in a big way and threating all his friends as well. This concluding volume is a fast ride with dueling factions trying to gain a weapon of unknown power, a city in rebellion, and terrible acts of magic that leave destruction both on the physical plane and in the mind. Also expect torture, betrayal, and bad people occasionally winning the battle.

But I promise, there is a hopeful tone. It sounds crazy, but you are just going to have to believe me.

One of the best signs that a book is doing a whole lot right is when even things that usually bother are done well. In this case there is a magic ‘system’ in place that gets explained in more detail that I usually can put up with. The bloodmagic Kiran (and Ruslan) practice has always been present and the basic details were explained all the way back in book one. And it has always involved a mana pool by another name being fueled at the cost of other living things. But despite its video game similarities it always felt right for the setting; perhaps because the basic works of it usually sit in the background and only the glorious results matter to the narrative. In The Laberynth of Flame it finally got a bit too much page time for my liking as Kiran was running on a very limited pool for much of the book and thus it was ever present. But it did give everything a sense of urgency that is hard to pull off; soon I was wondering with each act if Kiran had what it took to keep going.

Courtney Schafer created a wonderful world in this series then teased us by only really letting us see a few cities and very little of the land. But the overall story is truly epic in scale; the small band of protagonists are fighting not just to save themselves but for the world. Ruslan has the power to destroy cities and the power he is seeking can do even worse. By keeping the cast small we as readers were forced to care; by keeping the cast powerful it is easy to believe that so few can have such a large effect.

It has been a long wait but The Shattered Sigil series is now complete. Though the nature of is publication sadly will probably assure it a place forever in the ‘most underrated fantasy’ threads of the world I hope it picks up some steam. It is truly one of those series with a little something for everyone; a bloody dark setting, world shaking events driving the plot, and a whole lot of heart. 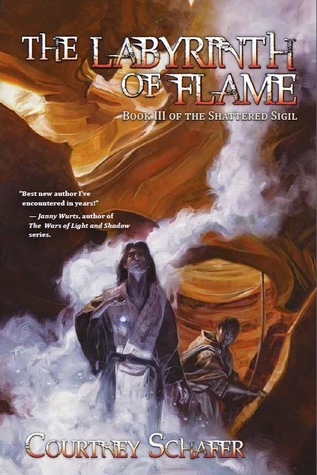