City of Wonders by James A. Moore
Series: Seven Forges #3
Published by Angry Robot Genres: Fantasy
Our reviews of this author: The Silent Army
Format: eARC
Source: Publisher
Thanks to Angry Robot for providing me with a copy of this book in exchange for my honest review. This does not affect my opinion of the book or the content of my review.

City of Wonders is book three in James A Moore’s Seven Forges series (Seven Forges being No.1 and The Blasted Lands No.2).  Seven Forges got off to a very intriguing start, The Blasted Lands built strongly on that foundation and left us with a rather jaw dropping finish then City of Wonders came along and left  no doubt that this series is firmly planted in the land of Epic.  Truly this is turning into a series to be reckoned with.

I’m not really going to go over much into the plot because it’s going to be very easy to spoil elements of the story that are best revealed as the tale progresses and, whilst talking of spoilers, although I try to avoid them it’s quite possible that this review may contain some revelations for the first two books so please be aware of that.  Also I would say that in order to enjoy the world created by Mr Moore you should start from book No.1 – at least I think so.

At the start of the story war is upon the Fellein Empire and masses of people are seeking refuge in Old Canhoon (or the City of Wonders as it is also known).  The Sa’ba Taalor are swarming the borders and seem virtually unstoppable killing everything in their path.  It seems like they’re not content just to kill their enemies, they seem to want to completely obliterate any trace of their existence.

Firstly, a little about the Sa’ba Taalor.  This is a fearless and mighty race of warriors who seem to bear deep hatred towards the Fellein Empire and would see it destroyed.  They’re not taking prisoners here but are aiming for complete annihilation.  This is a race of men and women that are ruthless.  They are unforgiving and value strength and courage above all other traits.  Grey skinned and with their faces partially covered by a veil (the nature of which is revealed at the end of book No.2) they may come across as somewhat unorganised in terms of appearance and attitude.  They wear no uniform as such, they forge their own weapons to suit their own particular style and taste and so there are no great swathes of co-ordinated swords and shields.  They don’t march in formation and to all intents and purposes they appear almost unformed and unruly.  And yet this couldn’t be further from the truth.  The Sa’ba Taalor put great faith in their Gods and follow and obey them without question and in that respect their Gods orchestrate everything.  They guide each of the leaders into whatever step is necessary next, placing them like pieces on a game board, until eventually they’ve maneouvered all the pieces into position for a perfect finish.

We follow a number of different stories which may at first seem a bit perplexing but pretty soon resolve themselves into a plan of quiet huge scope.   We watch the Empress and Merros Dulver as they try to brace for battle, shoring up the defences and preparing the army, aided in no small way by Desh Krohan and his magical counterparts.  We take a different route as we follow a small and beleaguered team of characters looking to uncover a secret, potentially a weapon that could assist in the defeat of the Sa’ba Taalor or then again maybe something the Sa’ba Taalor are also seeking.  We continue to follow Andover Lashk as he visits the Gods in their forges and we also watch the Pilgrim as he gathers about him an army of followers who also march to the city of Old Canhoon.

The world building is really quite unique and to be honest fascinating.  We range from places where the people seem to live not only in harmony with, but dependent upon, a huge ‘mother’ vine.  We visit a city where to raise a weapon against the inhabitants results in rather dramatic results to the perpetrators.  We come upon all manner of mighty and destructive creatures, watch necromancy in motion and spend time with one particular individual whose constant companion is a ghost.  And in spite of all the aforementioned the real show stealer is the City of Wonders itself – which it turns out is very appropriately named.

In terms of action this is a fast paced and battle packed book.  In fact I can’t deny that it’s kind of grim reading in parts when it seems like nothing can stop the unstoppable force of the Sa’ba Taalor as they march forward leaving bodies in their wake.  In fact for me one of the criticisms I had with the book is that it’s almost difficult to form attachments to the characters and in that respect I’m not sure who I would say are my favourites.  To an extent I like the King, Tuskandru and also Drask (who was one of the first characters we met).  Or maybe like isn’t the right word because these certainly aren’t soft and cuddly characters.  They’re both ruthless and fierce but this is in their nature so feels true somehow.  Not very well explained perhaps, it’s just that they’re not acting in a particularly nasty or malicious way just more keeping in character.  I liked Merros from the start and his character has definitely developed and become stronger and well respected – he’s even developing more of a friendship with Desh, who we are also starting to gain a little more information about albeit in tiny glimpses.   I think this is perhaps the one area of the series that I think could be built on a little.  We seem to have quite strong world building and a good deal of focus on the swordplay and fighting but I would like to spend a little more time with some of the characters.  That being said there was a lot going on here and quite a few threads to follow so something has to give.

On the whole this is a series that seems to become stronger with each book.  There is plenty of scope, a good deal of action.  Fearsome characters and a unique world with plenty of surprises in store.

Tags: City of Wonders, James A Moore, Seven Forges No.3 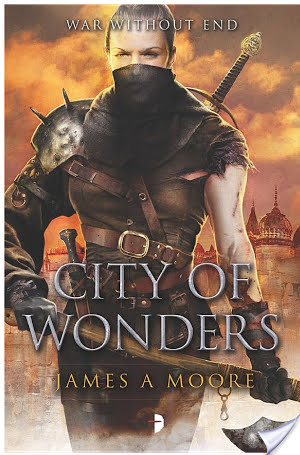