Towers Fall by Karina Sumner-Smith
Series: The Towers Trilogy #3
Published by Talos on November 17th 2015
Pages: 396
Thanks to Talos for providing me with a copy of this book in exchange for my honest review. This does not affect my opinion of the book or the content of my review.

Karina Sumner-Smith’s genre defying Towers trilogy draws to a close with Towers Fall, a series-ender that successfully lives up to the potential promised by the first two books. I remember being impressed when I first read Radiant, surprised that it was the author’s novel debut. I went on to read Defiant and was again blown away by the story’s premise and world building, and it feels deeply satisfying now to have come this far with our protagonists Xhea and Shai.

Things really started heating up in the second book, but now they are at a boiling point. The people of Lower City thought they would be given time to rebuild after the recent catastrophic events, but instead they are handed an ultimatum: Those on the ground will have three days to leave their homes, or the Central Spire will destroy them all.

Xhea and her ghostly companion Shai find themselves in the middle of the conflict again, attempting to rally the people to fight back and defend their homes. Through their experiences together, both have learned much about their special connection and respective magical abilities, but will it be enough? The Lower City has been revealed to be something more than anyone realized, and the Spire will stop at nothing to harness its magical energies. Now the girls will have to find out why, because the secrets of the towers may hold the key to stopping the oncoming destruction.

Once again we follow the structure introduced in book two, with chapters alternating back and forth between Xhea and Shai’s POVs. This is good for balancing the perspectives, especially since Shai’s role has grown to become just as important as Xhea’s after the first book. However, the book also follows this alternating pattern very rigidly, a stylistic choice that also has its downsides. For example, sometimes we’re forced to follow up with a character even when they aren’t doing much on the page to further the story. In these sections they were left there just to spin their wheels, and like the previous book, I felt more often that Shai’s chapters were weaker and had less direction when compared to Xhea’s. We lose some momentum in the middle of the book because of this.

Still, the bond between the two girls remains strong, which is great because their friendship is clearly the theme that defines this whole trilogy. This is in stark contrast to a lot of Young Adult novels these days that mainly focus on the emotional perils of romance. There’s also not enough YA fiction out there with strong female friendships; so many YA novels I read this year featured the female protagonist surrounded by only male friends, and if there is the presence of another prominent female character, often they aren’t the protagonist’s equal or they ultimately become her main rival. It’s very refreshing to see a series like this come along, showing how things can be done differently.

At this point, there’s also really nothing more I can say about the world building, other than it rocks. I’m still having a hard time deciding whether to categorize this series as science fiction or fantasy; after all, the towering skyscrapers and post-apocalyptic dystopian vibes make me lean towards the former, while the heavy emphasis on magic makes me think the latter. But at the end of the day, who cares? This trilogy has elements from a lot of different genres, and even includes ghosts and “walkers” that act very much like zombies. The important thing is finding balance, and I think the author achieved that marvelously.

My only complaint about this book is that the plot doesn’t feel as tight compared to the first and second novels—possibly related to the alternating POV issues I mentioned above. The pacing suffered slightly in the middle where certain chapters dragged on unnecessarily, and there just seemed to be more filler in this one, which made the story run a tad too long for my tastes. But other than that, I can think of little else that detracted from the experience.

All told, Towers Fall finished off the trilogy nicely, wrapping things up with a powerful and thought-provoking ending. If you’re ever in the mood to check out a truly unique series, be sure to give this these books a look. 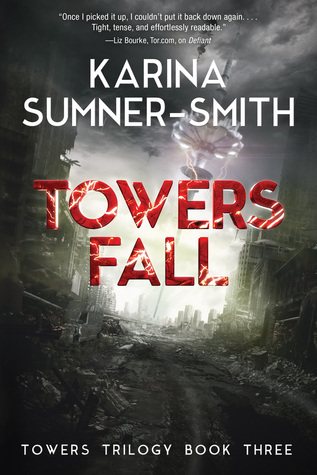