This Gulf of Time and Stars (Reunification #1) by Julie E. Czerneda
Published by DAW on November 3rd 2015
Genres: Science Fiction
Pages: 464
Format: eARC
Source: Publisher
Thanks to DAW for providing me with a copy of this book in exchange for my honest review. This does not affect my opinion of the book or the content of my review.

The Clan Chronicles is a series of books (This Gulf of Time and Stars is the first book of the third trilogy) set in a distant future of interstellar travel, alien races, and telepathic abilities. The Trade Pact, the first trilogy, introduced us to the alien Clan, a humanoid race that has doomed itself to extinction through selective breeding. The fact that Clan females kill their prospective mates, though, isn’t the scariest thing about them – it’s the way they exist in secret, disguised as Humans, using their telepathic powers to erase memories and control people without them knowing. Stratification, the second trilogy, is actually a prequel, introducing us to an earlier version of the Clan, long before they joined the Trade Pact, and before they bred themselves to the brink of extinction.

Reunification, the third trilogy, is a direct sequel to both stories. This Gulf of Time and Stars advances both the story and the Clan’s situation, introducing us to an era where they have been secretly invited into the Trade Pact, and then just as secretly exposed, adding the threat of extermination to that of extinction. While it could be read on its own, readers will get a lot more out of the story with knowledge of what’s come first. Julie E. Czerneda doesn’t waste a lot of time ushering readers into the world, instead throwing us right into a crucial negotiation between leaders of the races threatened by the Clan.

While The Trade Pact was about Sira, Reunification is very much about the Clan and Sira’s search for answers. For those who are new to the universe, Sira is an interesting character, a sympathetic heroine who is nothing like the terrifying monstrosity you’d expect of her race. When we first meet her here, she’s preparing for a “baby-rainshower-occasion” with her human partner, which is just as awkward and humorous as you might expect. In fact, Czerneda uses a lot of humor to establish the cultural differences between her races, which is a large part of what makes this such an accessible story.

At the same time, while some of the alien customs may be humorous, the aliens themselves can be creepy as hell (the Assemblers may be my favorite alien race ever), and the stakes in the story are about as high as they can get on an interstellar scale. This is often a very dark story, with a large cast of characters, and multiple shifts in POV (including shifts from first to third person). Even I found it a little bit dense at times, and I was coming into it with knowledge of the previous books. New readers may require a little more patience, but it’s worth the effort, especially since Czerneda has such a free-flowing lyrical style to her narrative. Once you get to know the Sira and Captain Jason Morgan, and begin to piece together the backstory from their discussions with others, you’ll find yourself caring about the central mystery a lot more, at which time that style will carry you along nicely.

This Gulf of Time and Stars is a blend of hard science fiction and interstellar space opera, with a solid basis in biology that makes for some fascinating reading. It’s a very different sort of story from her Night’s Edge fantasy series, but it shows the same love for her characters and the worlds she’s created. 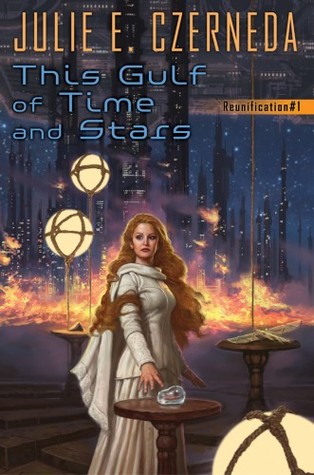