The King's Justice: Two Novellas by Stephen R. Donaldson
Published by G. P. Putnam's Sons on October 13th 2015
Genres: Fantasy
Pages: 320
Format: ARC
Source: Publisher
Thanks to G. P. Putnam's Sons for providing me with a copy of this book in exchange for my honest review. This does not affect my opinion of the book or the content of my review.

Stephen R. Donaldson is an author who (for better or worse, depending on how you feel about its deliberately unlikable protagonist) is largely identified by his three Thomas Covenant trilogies. It’s such a massive epic, and such a defining force in the fantasy genre, that it’s easy to forget he’s also written a pair of lighter portal fantasies (Mordant’s Need), an even darker science fiction saga (The Gap Cycle), a contemporary mystery series (The Man Who), and multiple short stories and novellas.

The King’s Justice is his latest collection, pairing two wildly different novellas in a surprisingly slender volume. Together, they make for an interesting read, showcasing two sides of his narrative talent.

First up we have the title story, The King’s Justice, which actually has something of an Old West feel to its flavor of traditional fantasy. Here we encounter a mysterious figure in black, known only as Black, who arrives in the village of Settle’s Crossways on the trail of murder. This was a dark, violent sort of tale, complete with magical compulsions and abhorrent sacrifices, that walks the sword’s edge between justice and vengeance. For such a short novella, there’s actually a lot of history and mythology hinted at in its pages, making it feel bigger than its page count. The narrative here is simple, without unnecessary flairs or flourishes, but it fits the rather sad and angry events that drive it.

The Augur’s Gambit, meanwhile, is an almost gothic fantasy tale of politics and prophecies. Mayhew Gordian is hieronomer to the Queen, reading her fate in the bloody entrails of beasts and (in one dark case) stillborn babes. Queen Inimica, meanwhile, is a woman desperately seeking to preserve her doomed kingdom through a complex (and somewhat comic) plot of marriages. In between them is the Queen’s plain-faced daughter, who serves to breathe some life into the rather dour, sterile narrative of Mayhew. It’s an interesting story, but slowly paced, and held back by the weakness of its narrator. While I wouldn’t mind revisiting the lush world of Indemnie, it would have to be with a more engaging guide, and there would have to be more going on to move the story forward.

While not nearly as bleak as the Thomas Covenant stories, these are still dark tales with a lot of edge. Fortunately, they’re also imaginative and well-crafted, making them solid additions to Donaldson’s shelf. 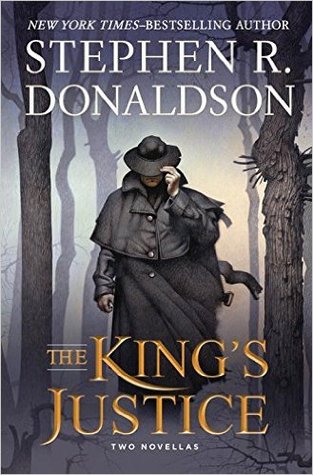