Reign of Iron by Angus Watson
Narrator: Sean Barrett
Series: Age of Iron #3
Published by Hachette Audio, Orbit on September 1st 2015
Genres: Fantasy
Pages: 544
Length: 15 hours 16 minutes
Source: Publisher
Thanks to Hachette Audio, Orbit for providing me with a copy of this book in exchange for my honest review. This does not affect my opinion of the book or the content of my review.

As usual, this review will be spoiler free for Reign of Iron, however, (also as usual), there may be spoilers for the previous books in the series. In this case I wanted to give an extra reminder/warning, because I discuss how a *huge spoiler* for the series from book two impacted this book.

Angus Watson has shown he has some serious guts when it comes to his writing. We were left with a complete game changer at the end of the previous book and I am impressed with how Watson handled everything after. Honestly, it was something that could have gone horribly wrong in terms of story telling. But this final book proved that Watson knew what he was doing.

The death of a major character, actually, I would argue THE major character from books 1 and 2 was a huge risk. I mean, for all the talk of authors like Martin showing their characters no mercy and killing them at will, I have to say there has never been a death in ASoIaF as shocking as what we read at the end of Clash if Iron. That would be like killing Arya , Tyrion or Jon Snow, and even Martin hasn’t gone that far.

So, the overwhelming question going in to book 3, is how is this series going to survive the catastrophic blow we were left with a the end of the Clash of Iron? I have to admit, I missed him. He brought a lightness to all the darkness with his outlook and humor in a way that I don’t feel any of the characters were capable of. BUT …. The third book worked. It really did. Sure, I missed Dug, but so did everyone in the book. And even without him, I had at least one literally laugh out loud moment. Those are very, very rare for me, but Watson manages to pull it off through out the series, and I love his books for that. I can’t tell you how impressed I am that this final book worked so well despite missing a character that we had grown terribly attached to in previous books. In life you have to move on, and this book manages to keep a balance and to keep the reader fully engaged as it moves on past that tragic event.

We probably have a compelling story and some other pretty amazing characters to thank for that. Namely, Lowa and Spring. We continue to get perspectives from Lowa, Spring and Ragnall. Again, Ragnall is my least favorite, but I think that’s just the nature of his character. He’s a reprehensible and a traitor, and it is hard to like him when you want to root for Lowa and Spring. That said, I was strangely amused by him at times as well while loathing him at the same time. It’s like watching a car wreck, you just can’t help but trying to see how bad it will be. I may not like him, but he is still capable of entertaining me.

Lowa and Spring continue to be amazing characters. We see Spring matured and coming into her own. I still really enjoy her, in fact, I’d love to read a series that focuses more on her. Every book I have wished that Spring was featured more predominantly, and this one is no different. She’s just fascinating. Perhaps if we had more of her I would find her less alluring, but I doubt that. Lowa is struggling to find a way to win this war, and with Dug no longer at her side, and Spring having lost her magic, she is more on her own than ever before. But, she’s Lowa, so you know she will come up with some amazing tactics along the way.

I still feel this series should get more love and attention. It is brutal but that is tempered quite well with some amazing dark humor. For me to laugh out loud at a book? That’s high praise. While I had some reservations with the way Clash of Iron ended, this third installment and solidified Angus Watson on my must read list as well as placing the series high on my recommendations list.

Audiobook Notes: I will admit, I don’t always like epic fantasy as an audiobook. For me it can sometimes be harder to follow, harder to keep track of places and names. But this worked very well for me. It might help that I had read the first and second books in print version, but I suspect this series in general works well in audio format and Sean Barrett’s narration is wonderful. He gets just the right amount of attitude behind the words to deliver those amazing lines that make me laugh. He also keeps the rest of it fresh and exciting. Highly recommend this book and series in either format. 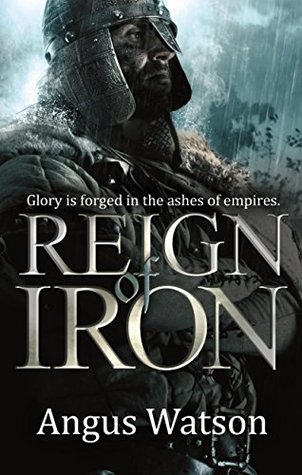