The Geomancer (Vampire Empire: A Gareth and Adele Novel) by Clay Griffith, Susan Griffith
Published by Pyr on November 3rd 2015
Pages: 321
Thanks to Pyr for providing me with a copy of this book in exchange for my honest review. This does not affect my opinion of the book or the content of my review.

The Geomancer by Clay and Susan Griffith is a further instalment that brings to us the strange and very readable world of The Greyfriar (Gareth) and the Empress of Equatoria.  This is the fourth story set in this unusual alternate world and whilst I will try to avoid spoilers for this particular novel this review may contain spoilers for the previous books.  To be honest – I wouldn’t advise reading this as a standalone.  I think in order to fully appreciate the strength of feeling between the two main characters you have to begin at the beginning.

I’m not going to give a long description here about the past history – like I said above I think you need to read this series from the start and with that assumption in mind I’m thinking no backstory is necessary.

At the conclusion of the Kingmaker’s Adele was manipulated into using a massive surge of geomancy which wiped out the British clans, freeing the land from vampire rule and creating a protective barrier to prevent their return.  Unfortunately, it also left huge scars on the natural rifts and badly drained Adele, ageing her somewhat in the process.

Adele and Gareth now spend their time between places, especially enjoying their retreats to Edinburgh but on one such visit they discover that a number of grisly murders have started to occur in London and so they once again set out to look for answers, concerned that maybe the vampires have found a way to return.  Unfortunately Adele isn’t the only geomancer and it seems that she has a rival called the Witchfinder.  The Witchfinder works for the vampires and is discovering ways to not only protect them from Adele’s power but also to use a similar strain of geomancy that will kill humans instead!  And so we enter a strange race between Adele and the Witchfinder to try and find an ancient artifact that in the wrong hands could spark an apocalypse.

I actually think this was my favourite of the series so far.  It had perfect pacing and plenty of action.  There are a number of tumultuous battle scenes with vampire fighting vampire.  Some amazing locations and further character development accompanied by excellent dialogue.

Basically, for me, the winning element to these stories is Adele and Gareth.  They have such a strong relationship and seem so much in love that it’s impossible to read these books and not become involved.  Let’s face it, this isn’t an easy relationship – apart from the glaringly obvious fact that Adele is human and Gareth a Vampire, they’re both very different in terms of character.  Adele is strong and stubborn.  She will do anything to protect her family, friends and people but alongside that she has a vision which doesn’t involve one race wiping out the other.  Added to she carries a shining torch of optimsm.  Gareth is different from other vampires.  He believes his race to be ultimately doomed and thinks he’s the only forward thinking one of his kind to behave the way he does in terms of respecting humans and not killing them whenever he feeds.  He loves Adele but he is basically a lot more despondent about the future and lacks her belief that both species can live together.

Anhalt also makes a very welcome appearance.  I do like this character.  He’s just so very proper somehow.  You do feel for him a little though as his battle wounds are starting to take their toll and he’s not the sort of character that’s prepared to wait on the sidelines while the action is playing out.  We also pay a visit to Adele’s brother Simon – this was an interesting development.  Simon is growing up and starting to rail a little bit.  He always gets left behind with all the boring paperwork while Adele dashes around the world with the Greyfriar pursuing adventure.  I wonder where that element of the story might take us – not to mention I do wonder how he will take the news about the real identity of his hero.  I can’t imagine that he will be pleased to be honest but we’ll see.

On top of this I enjoy the writing very much.  These books are easy to read and yet manage to convey a wonderful amount of detail without slowing the pace or becoming tedious. In this particular story we once again visit Paris where the King and Queen are having their own brand of family turmoil.  The Paris element, similarly to the London side of these stories, is a great setting.  The ruined city is so easy to visualise and the combination of dereliction and underground catacombs adds a dark seedy element to the vampire world.

We also travel to a hidden monastery in the mountains of Tibet.  This was a really surprising element to the story and one that I really enjoyed.  I can’t really go into a lot of detail because it will give too much away but it’s at this point in the story where we finally start to see something of a breakthrough in terms of the way that vampires and humans see each other.

In terms of criticisms – well, I did have a moment as we moved along where I wondered why the Witchfinder would want to kill humans on such a massive scale?  I think I would have liked a little bit more detail about that.  In fact – the vampires surely wouldn’t want to kill all the humans!! As it was the Witchfinder felt a little bit flat in terms of motivation – other than that he’s plain crazy of course.  Maybe not the most convincing bad guy but there is another evil baddie who more than makes up for anything that he lacks – again, can’t really give anything more away on that front.

I really enjoyed The Geomancer.  I thought it had a great plot and I can see lots of potential for future storylines.  If you’re looking for a vampire story that’s a bit different, has plenty of action, has steampunk elements and a little romance then I strongly recommend this series for you. 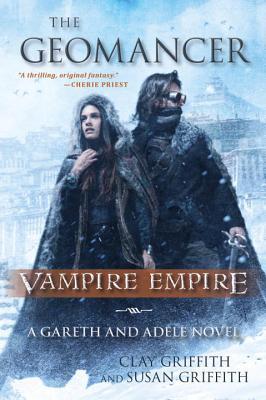