An Apprentice to Elves by Elizabeth Bear, Sarah Monette
Published by Tor on October 13th 2015
Genres: Fantasy
Pages: 336
Our reviews of this author: The Stone in the Skull
Format: eARC
Source: Publisher
Thanks to Tor for providing me with a copy of this book in exchange for my honest review. This does not affect my opinion of the book or the content of my review.

An Apprentice to Elves is a rather beautifully written story that takes us to the land of the North, Iskryne.  This is a harsh place to survive, its people have withstood many attacks not least of all from the  Trells (trolls that seem to be able to move stone to their will) and have also learnt to stay alive during the fierce winters. Their metal is about to be tested greatly by the arrival of the Rheans.  It’s difficult to withstand an enemy that has seemingly endless resources and is both ruthless and determined.  This is book No.3 of the Iskryne Trilogy.  I haven’t read the first two books but feel that this reads well as a standalone and, whilst based on my experience with this I would quite like to go back and explore the previous novels, I don’t think it’s necessary to do so before picking up An Apprentice to Elves.  I would also mention that not having read the previous books I may unwittingly include spoilers so please be aware of that possibility before reading my review.

At the start of the story we are introduced to Alfgyfa who has, in an attempt to establish better relations between men and elves, been sent by her father to become apprentice to a Mastersmith of the Alfar named Tin.  I think both Tin and Alfgyfa’s father have a vision for a more peaceful understanding between not only the Svartalfar and man but also hope to bring the Aettrynalfar into the picture.

The story is based in an imaginary world drawing heavily on Norse myth and the history of the Romans.  Basically the story includes men, elves and wolves.  In brief, and apologies if I misspell anything here, we have trellwolves.  These seem to be rather enormous and intelligent beasts who are able to form a telepathic link with certain men – who then become known as wolfcarls.  We have the race of elves who seem to be split into two factions at odds with each other known as the svartalfar and the aettrynalfar – they have an old enmity towards each other stretching back over the years.  We also have the Rheans, who clearly share a strong resemblance to the Romans and would try to inveigle themselves into the country with the promise of peaceful trade and yet at the same time arrive with ideas of regulating religion and eventually taking the young under their wing.  All this, of course, in the name of better education but nonetheless with the effect of eventually removing any traces of history or culture and thereby sterilising the race.  Understandably, the men of the North are not too keen to bend their knee and pay tribute or to lose their own sense of identity.

In terms of story, the underlying theme revolves around the threat of war and the steps needed by the men of the North in order to avoid defeat.  At the same time we follow in the footsteps of Alfgyfa and watch her development.  Alfgyfa is headstrong.  She longs for the bond with a wolf that the men from her home enjoy.  Of course such a bond is forbidden to the females – for what reason I have no idea – but Alfgyfa is determined to follow her own heart – even if this leads to any number of problems for her along the way.

I have to be totally honest here and say that if you’re expecting a fast paced story with battles and swordplay then you could be in for a surprise as this isn’t what you’ll find here.  This story is rich in detail and slowly builds up not only the personalities of all the main characters, including the wolves, but also sets the scene of their daily lives.  Frankly, I enjoyed the attention to detail as it paints a vivid picture which I found fascinating. I particularly enjoyed the little snippets of information about the wolves and their behaviour which made me want to laugh out loud in parts as it seemed so well defined. Like I said, this probably isn’t for everyone as it is definitely a slow burner but I enjoyed the world building and characterisation.

In terms of the characters.  I wouldn’t particularly say Alfgyfa was my favourite – which is odd as she is the main character here and I did have a degree of sympathy for her situation.  Having lived almost half her life in one home and half in another – and never having been truly accepted in the latter – she’s now a little like a fish out of water belonging in neither one place or the other.  I did like that she decided her own path and stood by her actions and also that she was determined to help her people survive.  My favourite characters were Tin, a matriarch and master of the Alfa. She is a study in patience and intelligent in the ways of looking at the bigger picture.  I liked her sense of right and wrong and the way she was absolutely determined not only to help Alfgyfa choose the best path but also to assist and pay back what she perceived as a debt.  The other character that stood out for me was Otter, a former Rhean slave, and branded as such, she makes a really intriguing addition to the overall dynamic.

Criticisms?  Well, considering the detail displayed throughout the book the ending felt a little rushed and maybe too easily sewn up.  Also, as you may be able to tell with the names above – some of them are like reading tongue twisters and do have something of a way of stopping you in your tracks, at least until you get used to them and, I’m more than half certain that I was probably saying all of them wrong inside my own head!

Otherwise I enjoyed this.  It’s a very detailed exploration of an unusual world full of strange creatures told by a young woman who is determined to prove herself. 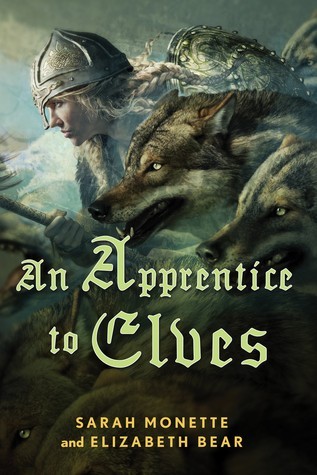