Swords and Scoundrels by Julia Knight
Series: Duelist's Trilogy #1
Published by Orbit on October 6th 2015
Genres: Fiction, Fantasy
Pages: 400
Format: eARC
Source: Publisher
Thanks to Orbit for providing me with a copy of this book in exchange for my honest review. This does not affect my opinion of the book or the content of my review.

Two siblings. Outcasts for life.... together. What could possibly go wrong?
Vocho and Kacha are champion duelists: a brother and sister known for the finest swordplay in the city of Reyes. Or at least they used to be-until they were thrown out of the Duelist's Guild.
As a last resort, they turn reluctant highwaymen. But when they pick the wrong carriage to rob, their simple plans to win back fame and fortune go south fast.
After barely besting three armed men and a powerful magician, Vocho and Kacha make off with an immense locked chest. But the contents will bring them much more than they've bargained for when they find themselves embroiled in a dangerous plot to return an angry king to power....
Swords and Scoundrels is the first book in The Duelist's Trilogy -- a tale of death, magic, and family loyalty.

Julia Knight is also Francis Knight, an author whose name has been on my radar since her Rojan Dizon trilogy, though this is the first time I’ve read her work. As soon as I found out about Swords and Scoundrels I knew it was going to be just right for me. As it happens, I’m a super mega fan of anything to do with swashbuckling duelists, and I could always use more scoundrels in my life. That and the cover is stunning too, not to mention the tagline made me chuckle.

Plus, a brother-sister team? Count me in. Older sister Kacha has devoted a lifetime to the training and mastery of sword fighting while growing up in the Duelist’s Guild, but she’s not content with being just good – she wants to be the best. Problem is, so does Vocho, whose whole life spent in his big sister’s shadow grates on him something fierce. Neither skill nor reputation would come to much use though, when both of them get thrown out of the guild for an infraction, and the siblings are forced to turn to banditry in order to make a living.

One day, a routine stick-up of a carriage goes wrong when their target turns out to be protected by a group of heavily armed men, including a powerful magician as well as Petri Egimont, Kacha’s former lover. The siblings manage to escape the scene with their lives and a mysterious locked chest. What it ends up containing though, is something much more valuable and dangerous than mere treasure, and Kacha and Vocho are about to discover just how far their enemies will go to get it back.

For readers who are looking for a fast and fun read, Swords and Scoundrels is perfect. There are a lot of things I liked about it: the smooth flow of the writing, the quick pacing, the witty dialogue, and plenty of adventurous action. But by far the novel’s greatest strength is its characters, and the complex sibling relationship between Kacha and Vocho, which Knight deftly conveys.

The focus on the brother and sister team was what immediately stood out for me when I read the description for this book, so it was no surprise when I also felt that was one of the most developed aspects of the story. As anyone with a sibling can attest, sometimes getting along with your brother or sister can be hard. Growing up, I probably spent as much time fighting with my own little brother as we did doing fun stuff together. Not to toot my own horn or anything, but I was also definitely the overachiever and the more responsible one, so for many reasons Kacha and Vocho’s rivalry struck me on a personal level. After all, siblings can drive you crazy sometimes, but they’re still family. Despite their differences, Kacha and Vocho stick together. They look out for one another. Arsehole or not, no one better lay a finger on Vocho, because if anyone’s going to kick his ass, it’s going to be Kacha herself. No one kills my brother but ME, damn it. Yep, I can sympathize with that sentiment.

We also find out more about the characters through a series of interlude chapters woven through the narrative. These begin in the past, chronicling the siblings’ admission into the Duelist’s Guild and their subsequent rise in their ranks, before gradually moving forward to present day where we find out why the two of them were kicked out. Sure, there were a few times where the placing of these interludes confused me and also disrupted the flow of the story, but generally these flashbacks helped by adding depth to character development and plot.

Like many first books of a series though, Swords and Scoundrels also had its weaknesses, mainly when it comes to the world-building and secondary characters. For the first half of the book, whenever the focus wasn’t on the protagonists, my attention would flag. I understood why Petri Egimont’s perspective needed to be there in order to show the other side of the situation, but understandably his sections simply lacked the draw and energy compared to Kacha’s or Vocho’s. Fortunately, towards the end of the book Egimont’s role became bigger so this became less of an issue, and I can see this improving in the sequel as well. The next book will probably also expand on the world-building, hopefully filling some holes left by this one. There’s magic in this world, but most of what we know about it is that magic and those who use it are bad and dangerous. Plus there’s also an insanely cool society and religion revolving around clockwork that I would really like to know more about.

Ultimately, the most important thing is that Swords and Scoundrels is great entertainment, and there’s more where that came from, too. All three books in this trilogy will be released in relatively quick succession, with book one releasing on October 6, 2015, book two Legends and Liars due on November 10, 2015, and book three Warlords and Wastrels on December 15, 2015. That’s great news for me, because I’m definitely on board for another duelist adventure. 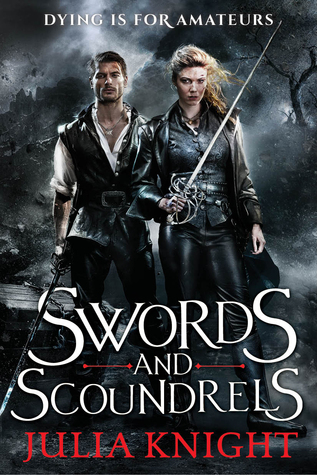