The Aeronaut's Windlass by Jim Butcher
Series: The Cinder Spires #1
Published by Roc on September 29 2015
Genres: Fantasy, Steampunk
Pages: 640
Format: ARC
Source: Publisher
Thanks to Roc for providing me with a copy of this book in exchange for my honest review. This does not affect my opinion of the book or the content of my review.

Despite the fact that it took me two weeks to read The Aeronaut’s Windlass, I had so much fun. This was my first Jim Butcher book, and I can see why he’s so popular. His storytelling is exciting and his characters practically jump off the page. No doubt my rating would be higher had the book been shorter, simply because there was just too much of it. But despite some slow spots and a few personal issues I had with Butcher’s writing (which I’ll get to later), I thoroughly enjoyed myself. Readers who love military proceedings and battles at sea are going to love this book. And although the story doesn’t take place at sea, but in the air, it still had the feeling of a rollicking sea adventure.

The story revolves around several groups of main characters. Captain Grimm is the commander of the merchant ship Predator and reports to the Spirearch of Albion. Spire Albion and Spire Aurora are at war, and after Grimm’s airship sustains major damage in an attack, Grimm reluctantly agrees to head up a secret mission for the Spirearch, in exchange for his ship being repaired. He is joined by an odd group of people: Gwendolyn Lancaster, a young woman who has just joined the Spirearch’s Guard; her cousin Benedict, a warriorborn with superior speed and strength; Bridget, another member of the guard (along with her steadfast companion, a cat named Rowl); and an etherealist named Ferus and his apprentice Folly.

But their mission is dangerous, and once they arrive at Habble Landing, it seems everyone wants them dead. The question becomes not will they succeed at their mission, but will they return home alive.

There were so many things I loved about The Aeronaut’s Windlass, but I have to start by talking about the cats. Before I started reading, I had no idea that TALKING CATS would play such a big role in the story. I don’t get the chance to say this very often, but I absolutely LOVE books with talking animals (as long as they’re done right, that is). These cats don’t speak English, however, they speak Cat, but what’s so cool is that several of the characters speak Cat and can understand and have conversations with them. Rowl is Bridget’s constant companion, and because they’ve spent so much time together, Bridget has learned how to communicate with him. Through her, we get to see the intricate social and political structure of the cat population. Rowl has given Bridget a “true name”—Littlemouse—which is a very high honor for a human to receive from a cat. Butcher must have first-hand knowledge of cat behavior, because his descriptions of how cats interact with each other, as well as humans, sounded completely convincing, even though I’m not a cat owner myself. There’s even a bit of cat romance that had me grinning from ear to ear!

I loved that there is no real discernible main character, although Grimm feels like he might be one. Butcher does characters really well, and there were several that ended up being my favorites. I loved Bridget, a girl who is forced to leave home (for her own good) by her father. She starts out scared and uncertain about her mission with the Guard, but as the story progresses, she becomes stronger and stronger. I was also very fond of Gwen’s cousin Benedict, who isn’t quite human. He’s a warriorborn, and has the speed and strength of a large cat (plus Butcher describes his eyes as being “cat-like.”) A romance starts to bloom between the two of them, which was an unexpected treat, because I was expecting Gwen and Grimm to become an item (and I’m so glad Butcher didn’t take the obvious path with the romance!).

Ferus and Folly are delightful characters, and just odd enough to make the reader wonder what the heck is wrong with them. Butcher explains the idea of “etherealism,” which seems to be gathering ether from the atmosphere and using it as an energy source, but he left enough of a mystery about the etherealists that I’m hoping he’ll go deeper into it in the next book.

And I can’t do a proper review without mentioning the steampunk elements. In this case, “steampunk” refers to the airships, huge vessels crafted out of wood that are lifted and propelled by crystals, which are the ship’s source of energy. Different types and sizes of crystals do different things, and of course some ships are faster than others due to their particular crystals. I loved this aspect of the story, and the fact that Gwen’s family makes the most expensive and finely crafted crystals in the land.

So yes, the characters and the small details of the world-building were wonderful, but I had some trouble understanding the big picture. I dearly wanted a map to refer to, and I suppose it’s possible the finished hardcover has a map.  This world is made up of Spires, and within the Spires are groups of dwellings called Habbles. The characters get from place to place on airships, but other than that, I had trouble visualizing the lay of the land. Much of the action takes place in the ventilation tunnels, close to the ground where most people won’t venture. I tried to picture the relationship between the ground and the Spires and how far apart they were, etc., but for some reason I just couldn’t figure it out.

Butcher may be one of those oh-so-popular authors (like Stephen King, perhaps?) whose editors turn their heads the other way and let him ramble on, when a more discerning editorial eye could have tightened up the plot and shaved a good 100 pages off of this behemoth. The air battle scenes at the end were thrilling, but they went on far too long for my taste.

Butcher has a writing quirk that I started to notice early on, and every time he used it, it stood out like a beacon. Instead of using a character’s name every time, he’ll switch over to a descriptive phrase instead, maybe for variety? I don’t know, but it bugged me. I’ll use Folly as an example. He uses her name to start the scene, but then he switches over to “the oddly dressed young woman” the next time he mentions her. He used that particular phrase so many times that I wished I had counted them!

But my silly pet peeves aside, this book was a blast to read, and I can’t wait for the next installment. With over 600 pages, you can bet there are lots of story elements that I didn’t even get to talk about in this review. (The silkweavers!) If you love adventure, strong characters and fascinating world-building, you’re going to love The Aeronaut’s Windlass. 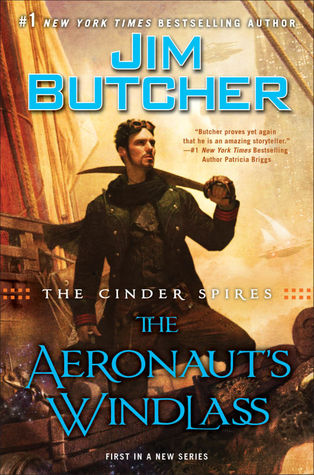